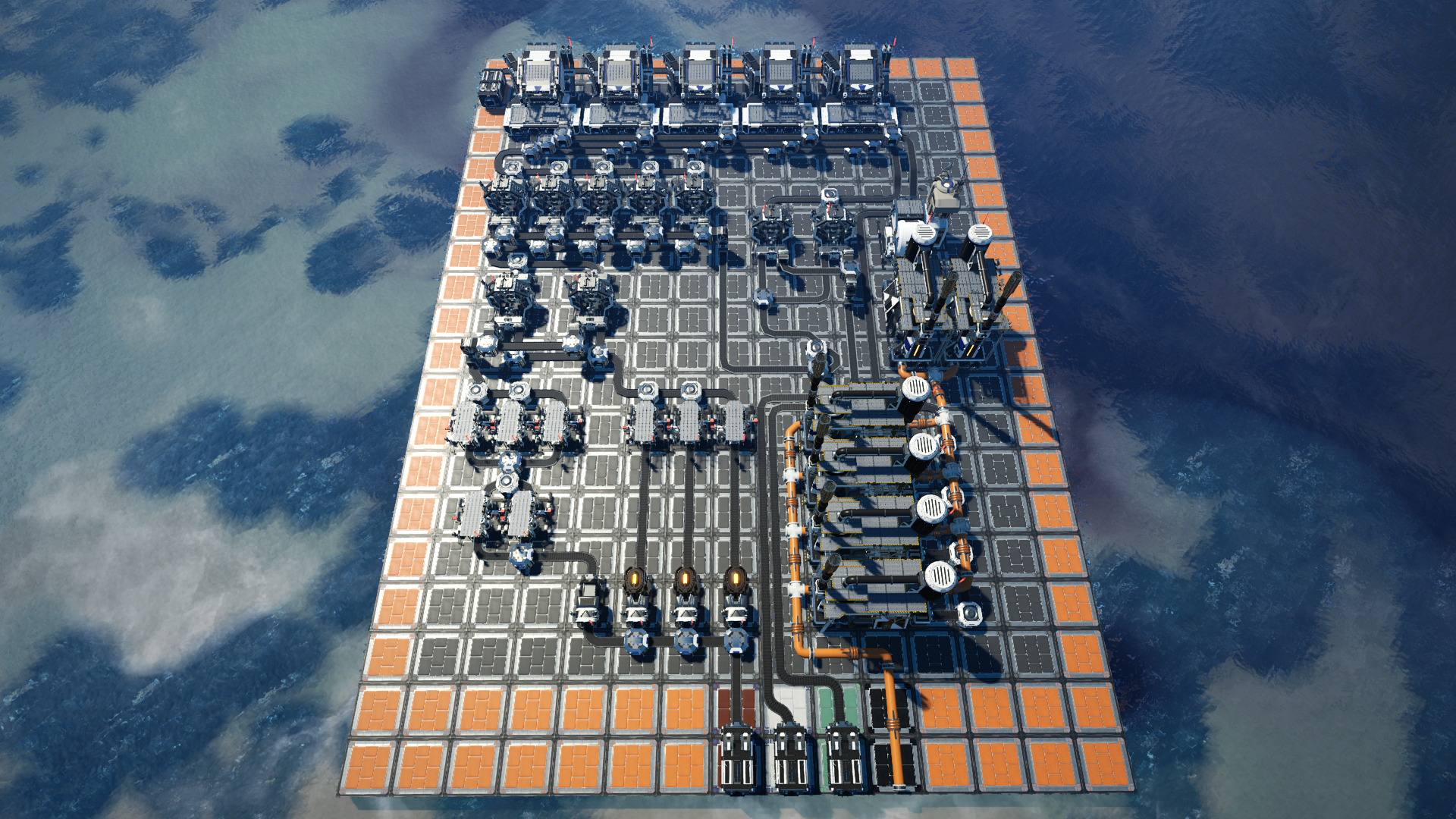 In this layout I will be talking you through how to produce modular engines in an efficient setup using the vanilla recipe.

Welcome to another Super Efficient Build Guide, today we will be producing 5 modular engines per minute, to be later used in thermal propulsion engines. To accompany this written guide there will also be a video guide which you can find in the link below.

For this build we will be using a total of:

We will also need resources to build the following:

This build will be done on a 13 x 18 grid and once up and running will cost no more than 668Mw
Take note that at the bottom of the grid we have the iron ore brought up in the 7th column in the brown box, followed by the rotors in the 8th column in white, then stators in the9th column coloured in turquoise followed by crude oil in the 10th column.
During this build you will also need a maximum belt speed of mk2 however I’ll be using Mk3s across the build.
In order to give you as much creative freedom, I will be covering the basic layout, feel free to move things around should you wish, to help you, I will list what’s going on at the start of each section. 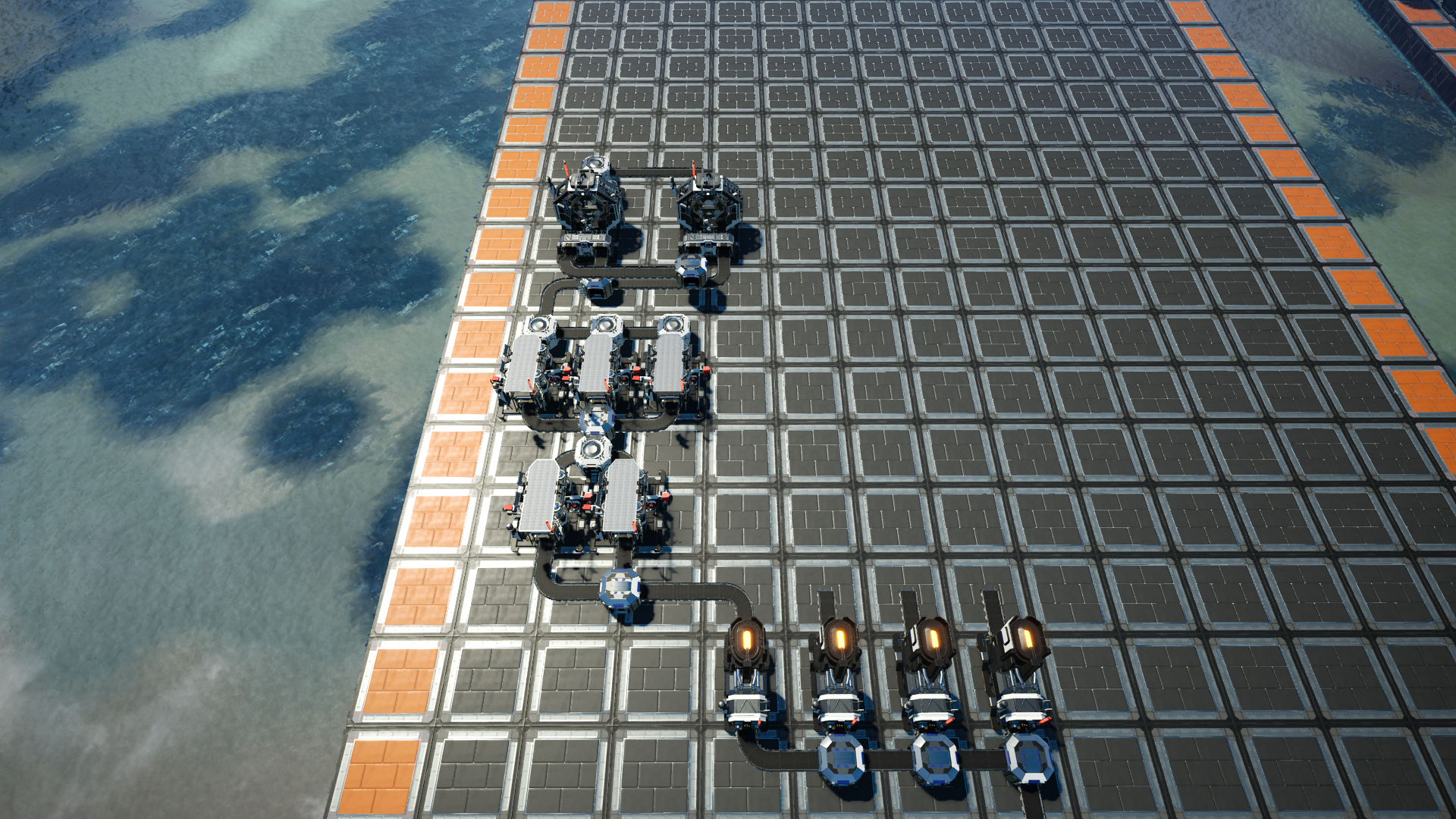 First we will sort out the iron production. The iron ore will run to four smelters, of which three will be dedicated to iron plates, leading to three constructors. The fourth smelter will run iron to a screw production line, which will use two constructors to produce iron rods, followed by three constructors for screws. The screws and plates will then be run to two assemblers to produce reinforced iron plates.
The four smelters will be placed in the middle of the fourth column of the second row, and will be placed up to the seventh row. These will all be set to iron, with the first smelter running the iron to a splitter followed by two constructors that span the  first and second, and second and third column of the fourth row. These will both be set to iron rods before merging and then splitting between three more constructors that will be placed in the first, second and third column of the sixth row. These three constructors will be set to screws and then merge into a manifold line which will feed the two assemblers that span the first and second and third and fourth column starting in the ninth row. These will both be set to reinforced iron plates. 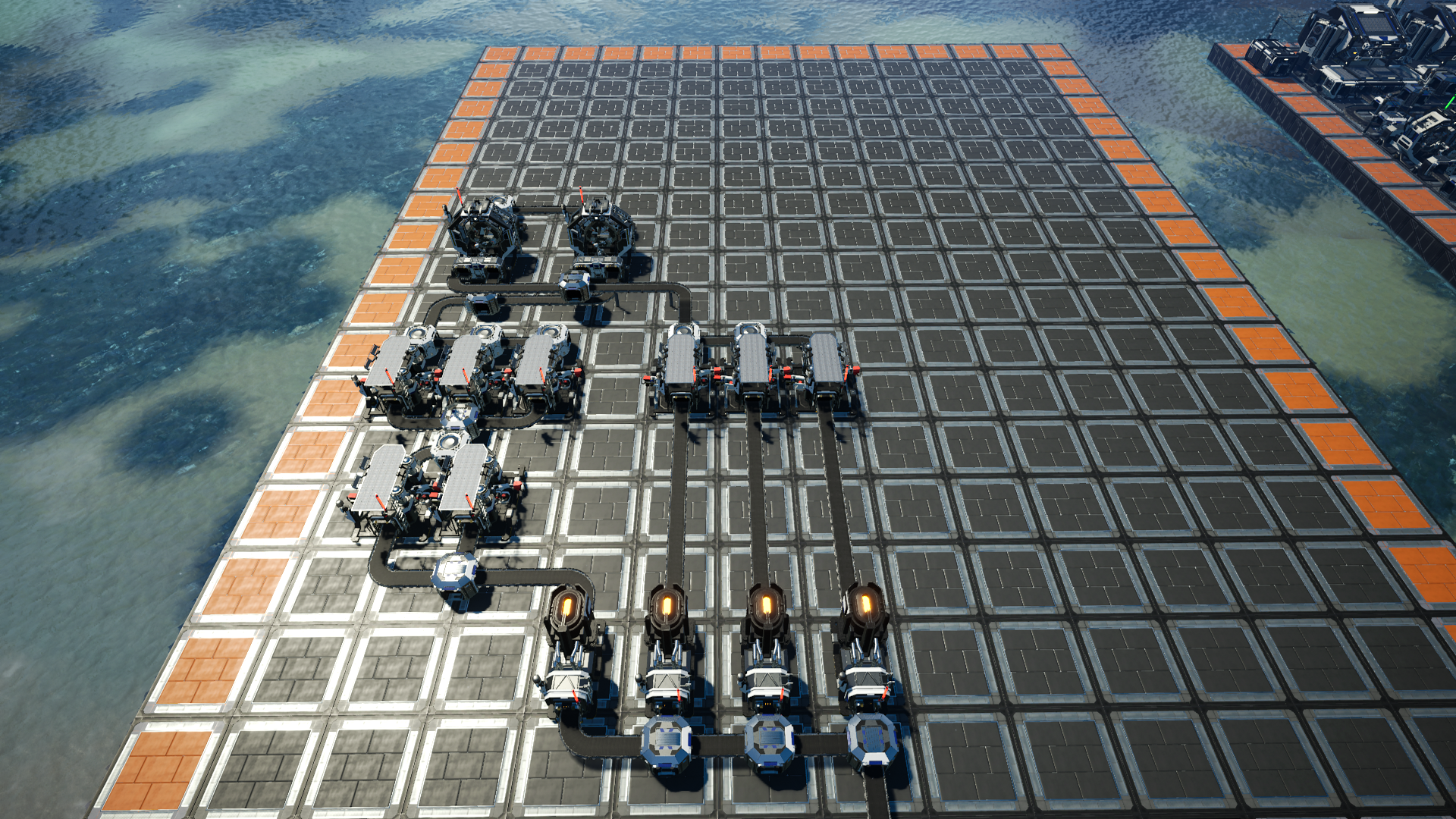 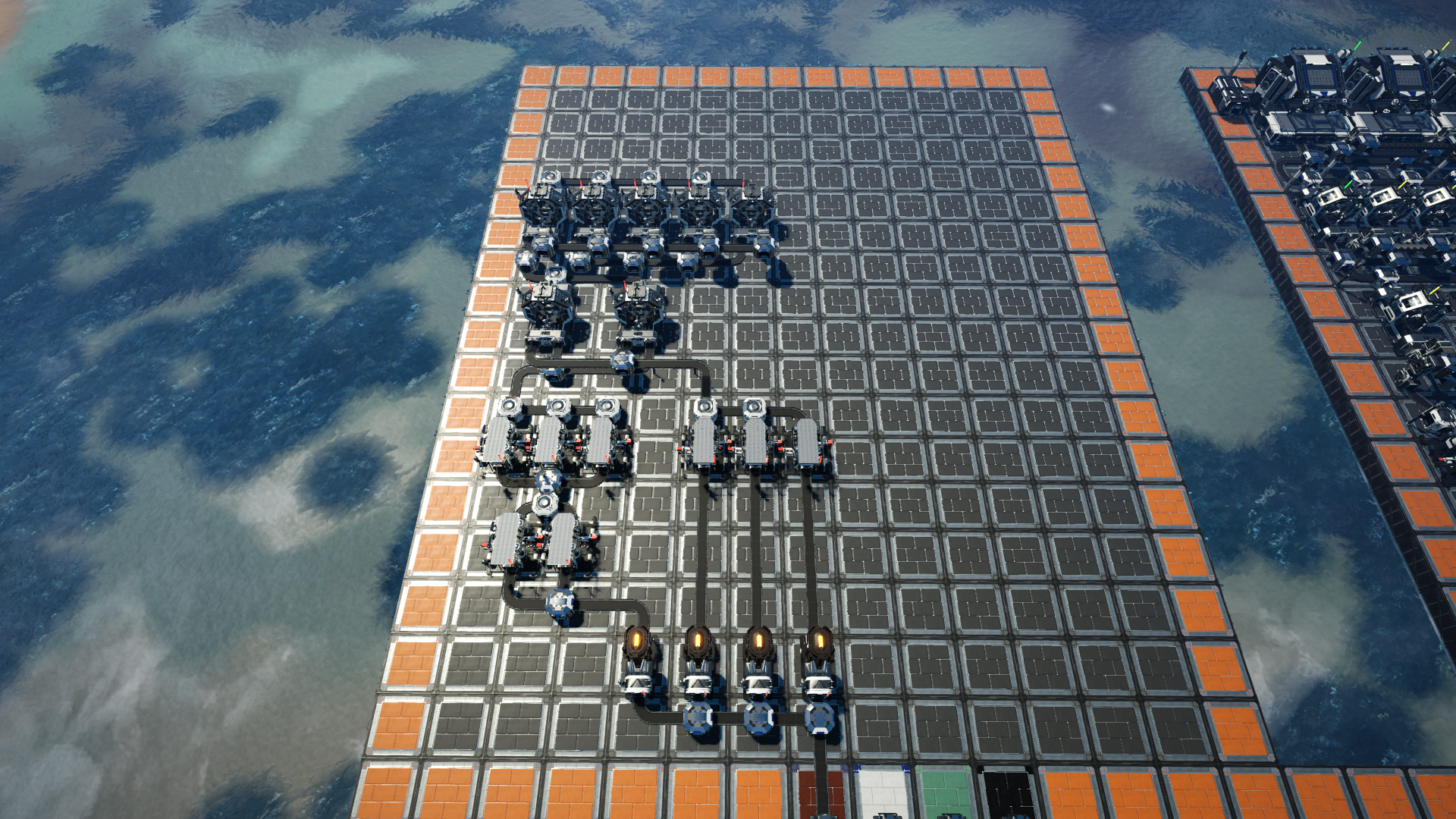 Place five assemblers next to one another, facing the top of the build starting in the first column of the 12th row. We shall now build a manifold line, the bottom row will be running the reinforced iron plates and the top row will be taking ten rotors of the 30 we should have for this build. If you are importing the ten rotors and ten motors, then run the ten rotors along the top manifold line running to the left. For everyone else we will need to create a one third split. Do this by placing a splitter down, followed by a merger. We will want one line from the splitter heading to this section with the other two outputs merged to go on to become motors.

Set all these Assemblers to smart plating with all the outputs merging to the left of the build. 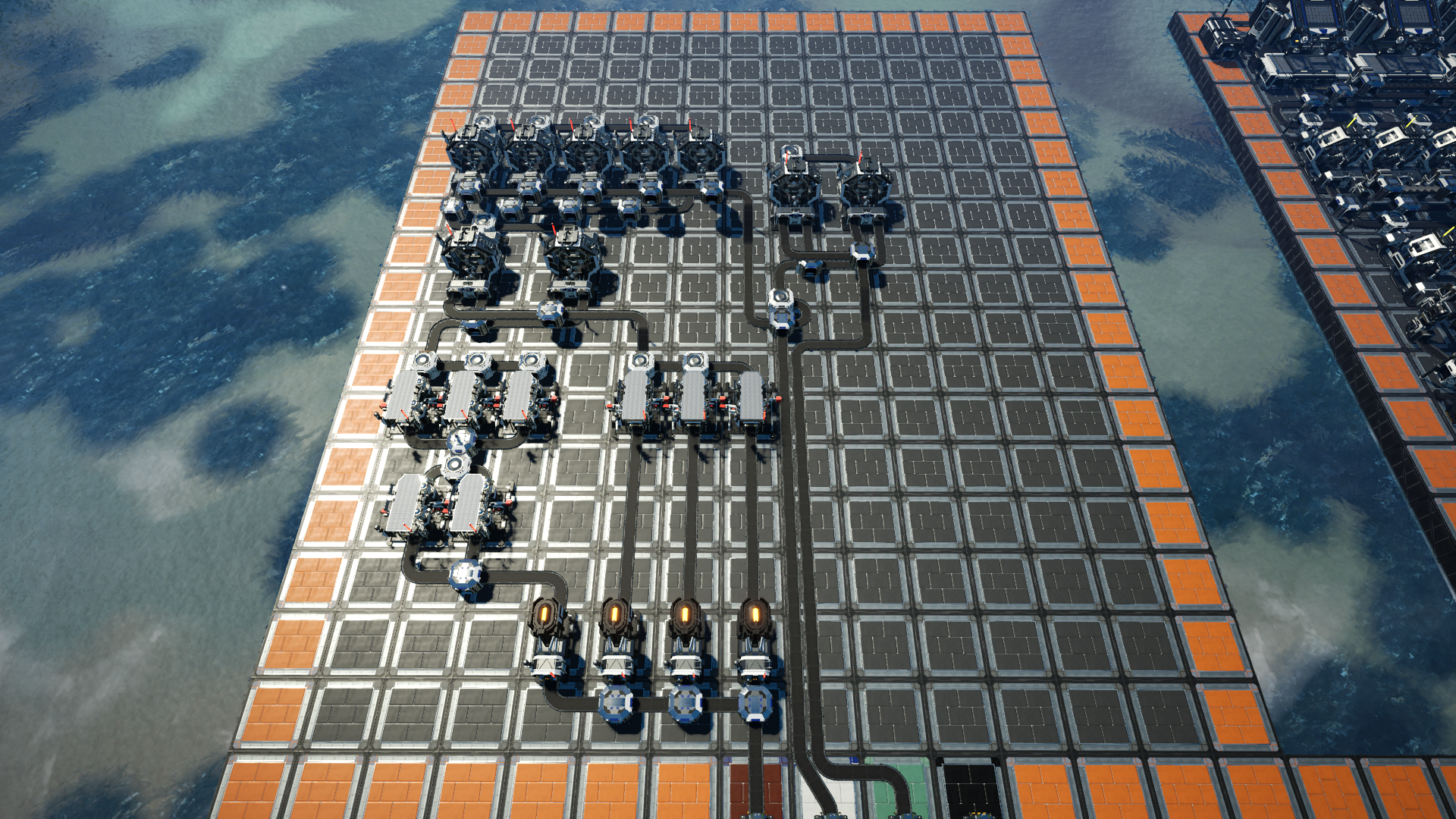 Next we shall place two more assemblers. One in the eighth column of the 11th row, and then the second spanning the ninth and tenth column. These will both be set to motors and should be fed with the 20 rotors and 20 stators These will then be merged and sent onto the manufacturers. If you have just the ten motors, send these directly up to the manufacturing line. 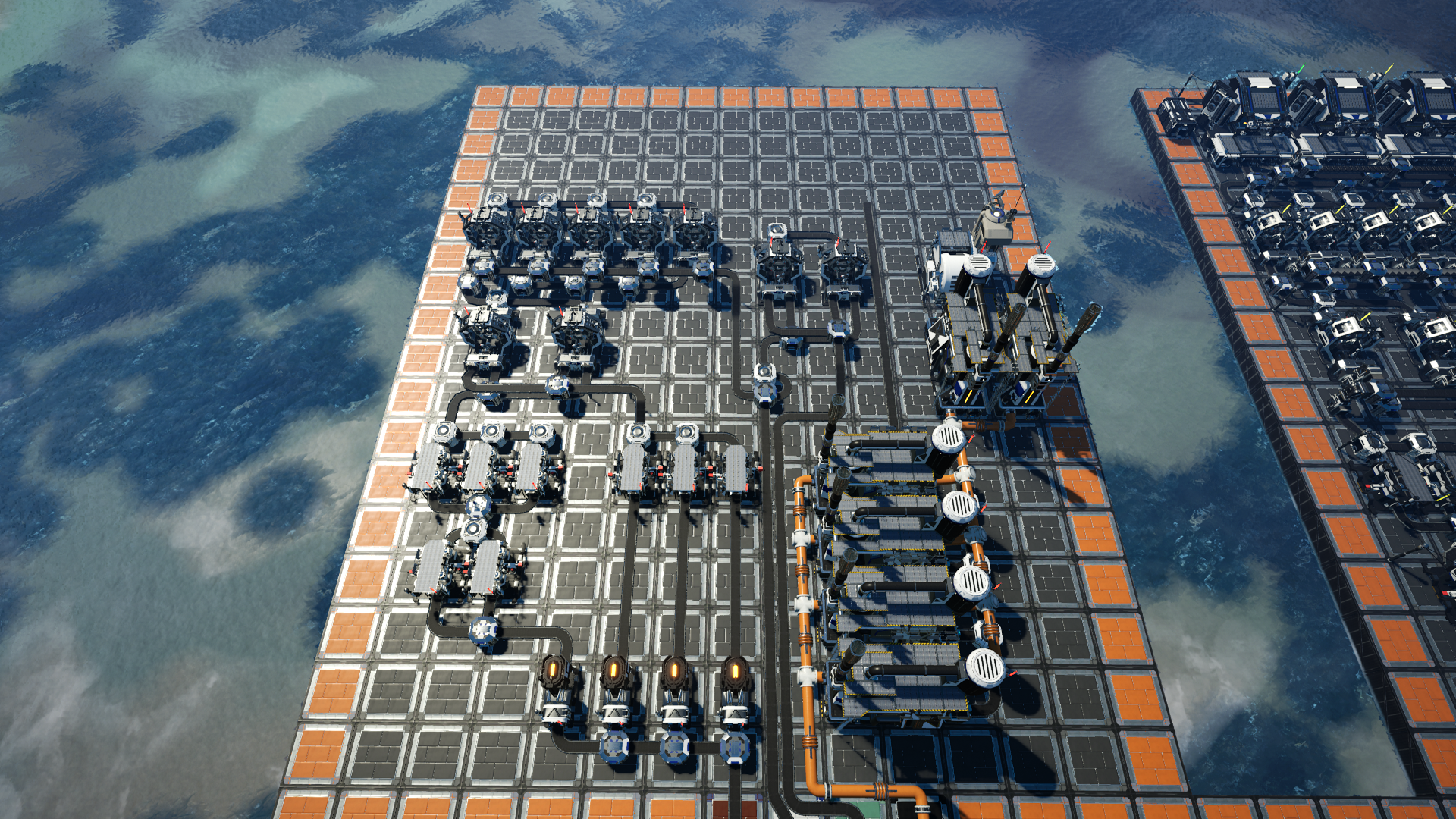 At this point we will need to turn the crude oil into rubber, first we shall place four refineries facing the right of the build starting in the ninth column of the second row. These will all be set to rubber with one of the refineries being set at 75% clock speed. The rubber will then be merged and run up to the top of the build. I should mention at this point, that I have added two more refineries. These have been placed in the eight row and are producing petroleum coke from the heavy oil residue. This is then sunk in the awesome sink. One of these refineries needs to be set at 87.5% clockspeed. 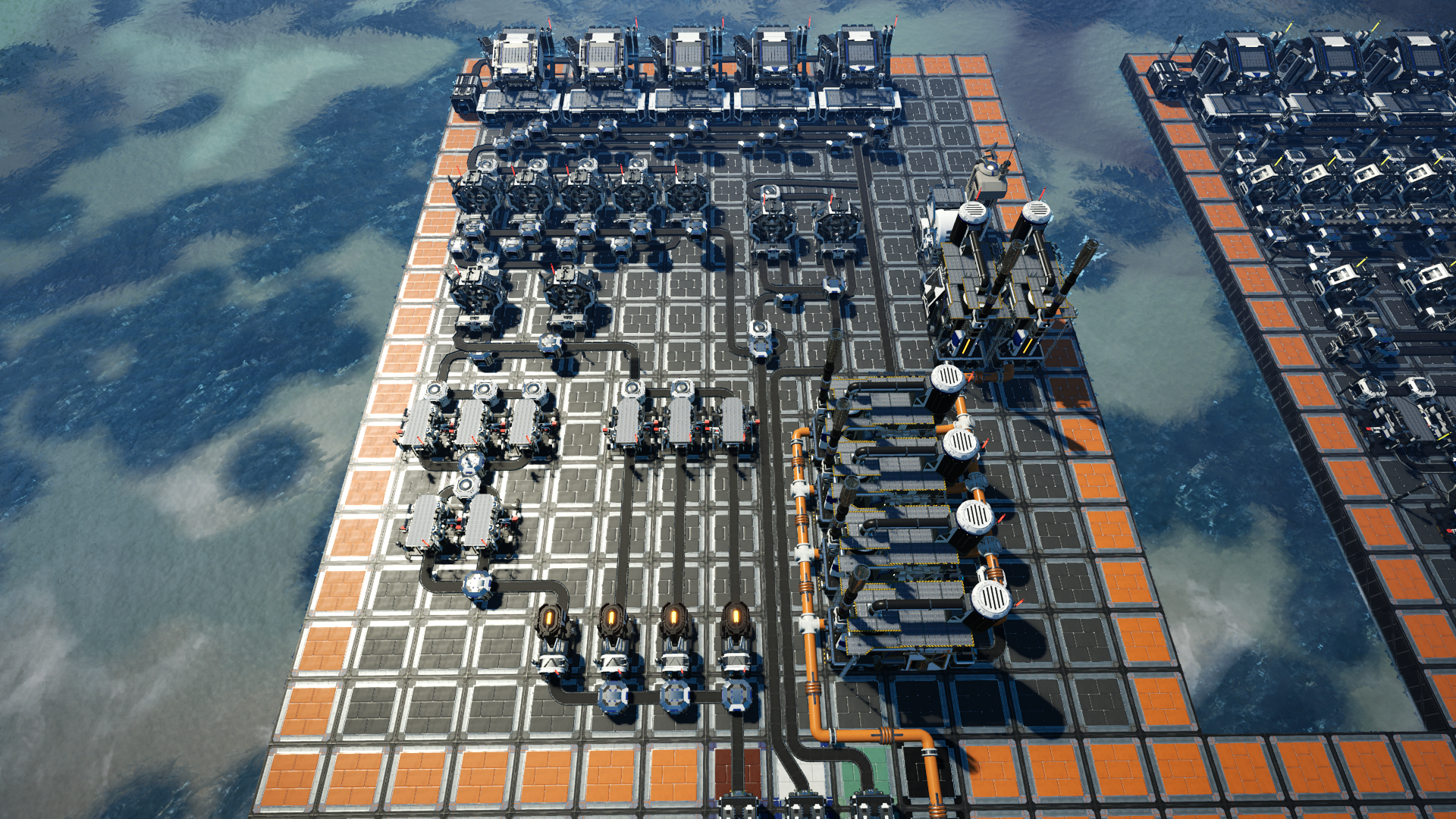 To finish off this build we will need to place five manufacturers in the First column through to the 11th column in the 17th row. These need to be set to modular engines with the outputs merged and then sent to storage, on the front side we will also need another manifold line. The first line will be fed by the smart plating, the second line by motors and the third line by rubber.

Once done you should have a fully functioning plant that produces a total of Five modular engines per minute.