This build guide will provide you with all the information you need to set up a 100% efficient build guide to produce 24 heatsinks per minute.

This build guide has been developed to help you produce a basic heatsink production line in Satisfactory update 4.
This guide will also include a video as well as photos to assist in understanding the layout.

For this build we'll be working with only raw materials, this should make the guide easily accessible to anyone with access to the aluminum tier.
For this you will need the following resources:

You will also need resources for the following buildings:

Note that this will cost less than 284Mw to run once fully setup. For this demonstration I’m using an 11 by 13 grid.
You can also see from the top down view where the various resources are being brought in from.
We have coal in the black square, bauxite in rusty red, raw quartz from the pink square and copper on the light turquoise square. 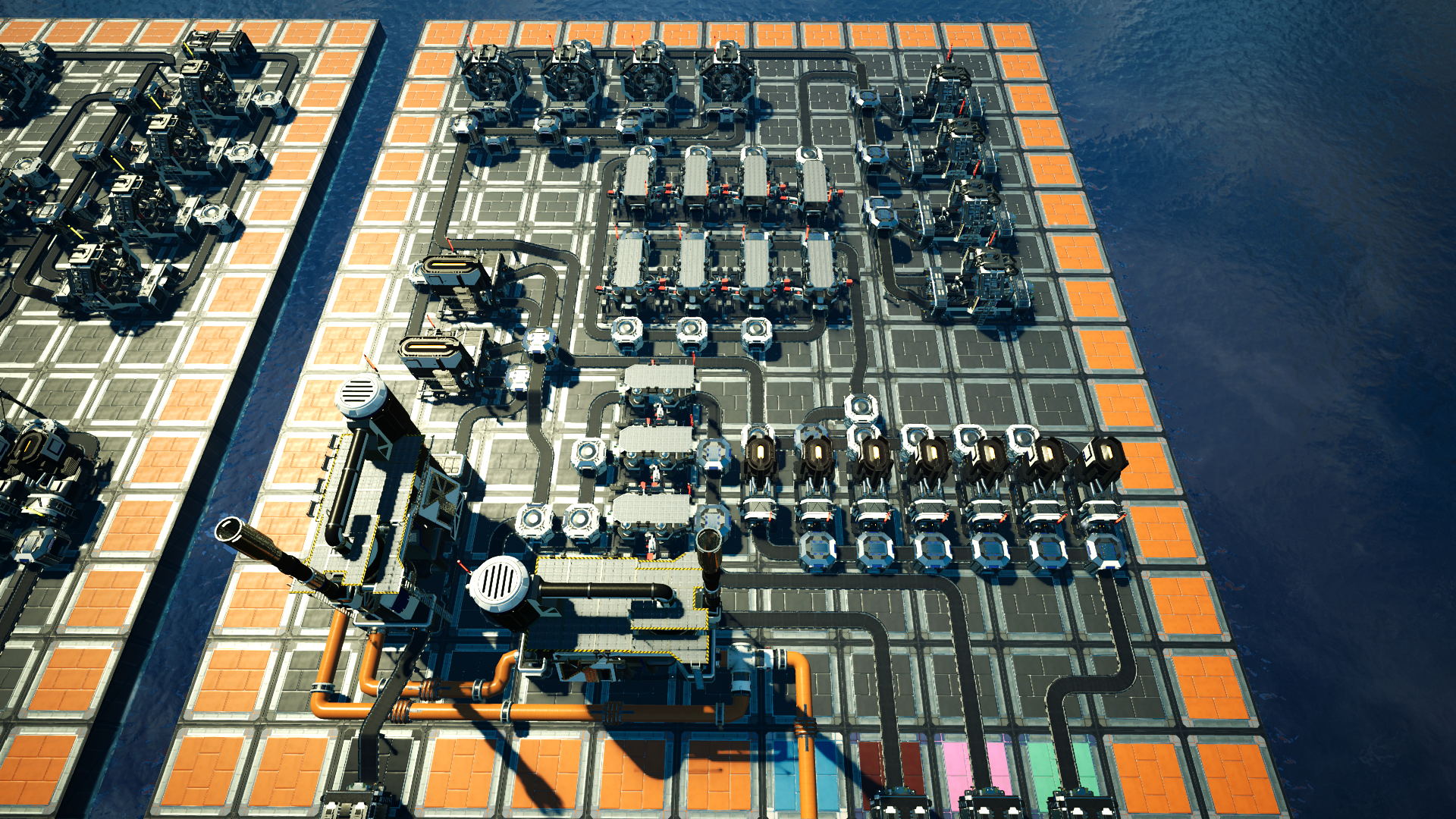 To start this build we will place down the copper smelters first. Starting from the centre of the 11th column, spanning the middle of the third and fourth row. We shall place 8 smelters against oneanother, we will then run a manifold of splitters feeding the smelters directly infront. These smelters will be set to copper ingots and the smelter in the 11th column will be set to 13.3333% clockspeed producing four ingots per minute.

On the opposite side we will have to separate the copper ingots into two lines, one of 40 copper ingots and the other of 144 ingots. To do this I have placed a splitter infront of the second smelter. 10 of the copper ingots will be split to the left and merged with the first smelters ingots these will then be used at a later date. At the same splitter in front of the second smelter we will take the other two outputs and merge them with the rest of the copper. These will head to a copper sheet line which we will work on shortly. 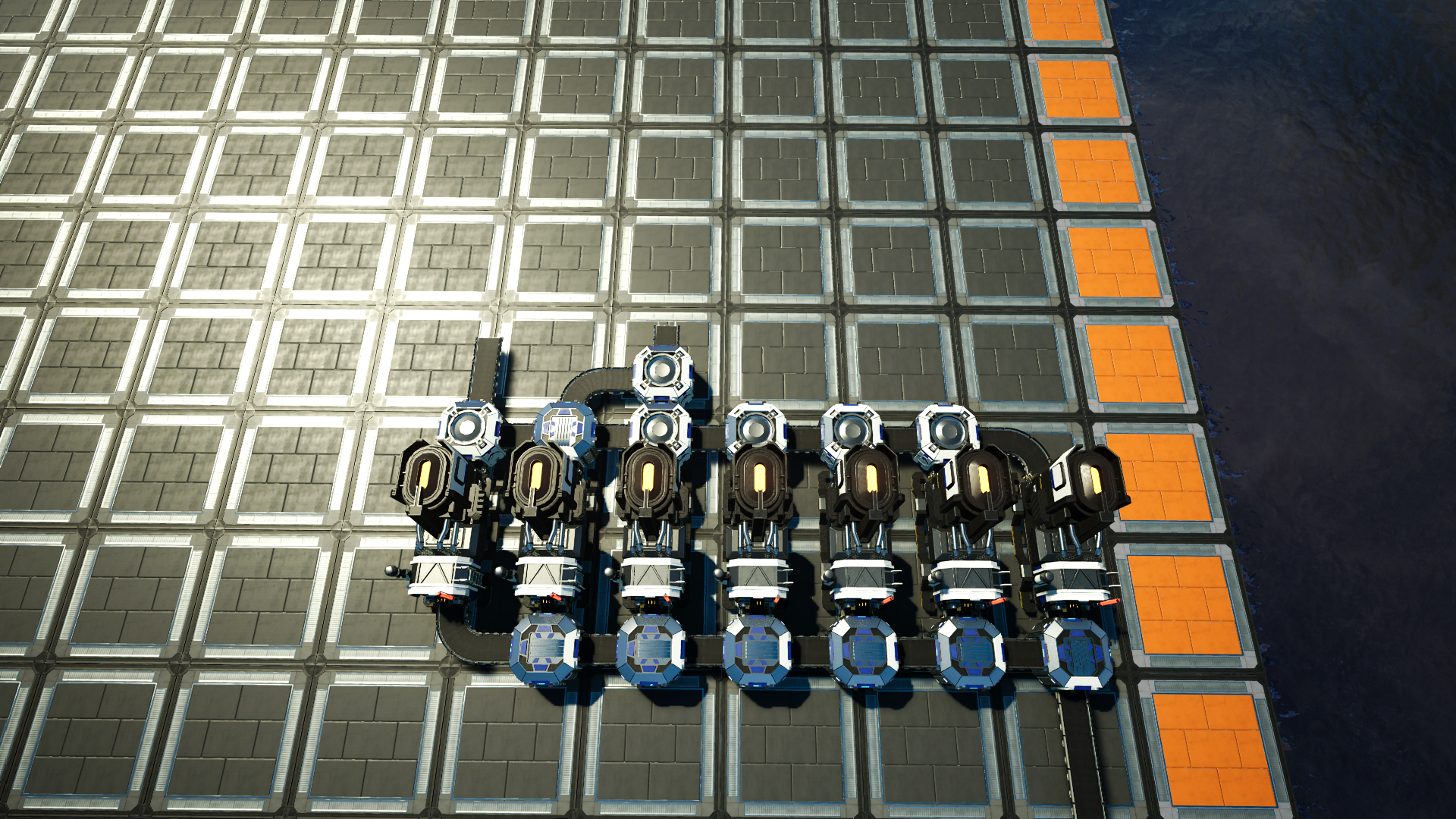 We shall now place three constructors for the raw quartz to be produced into silica.
Place the first constructor facing the left of the build in the third row of the fifth column, place two more constructors above this. These will be set to silica with one of the constructors set to 25 silica per minute, which is an underclock of 66.6667%. These will be fed by a manifold and the conveyor should run flush against the smelter manifold line.
The silica will be merged with more silica from a refinery which we shall place next. 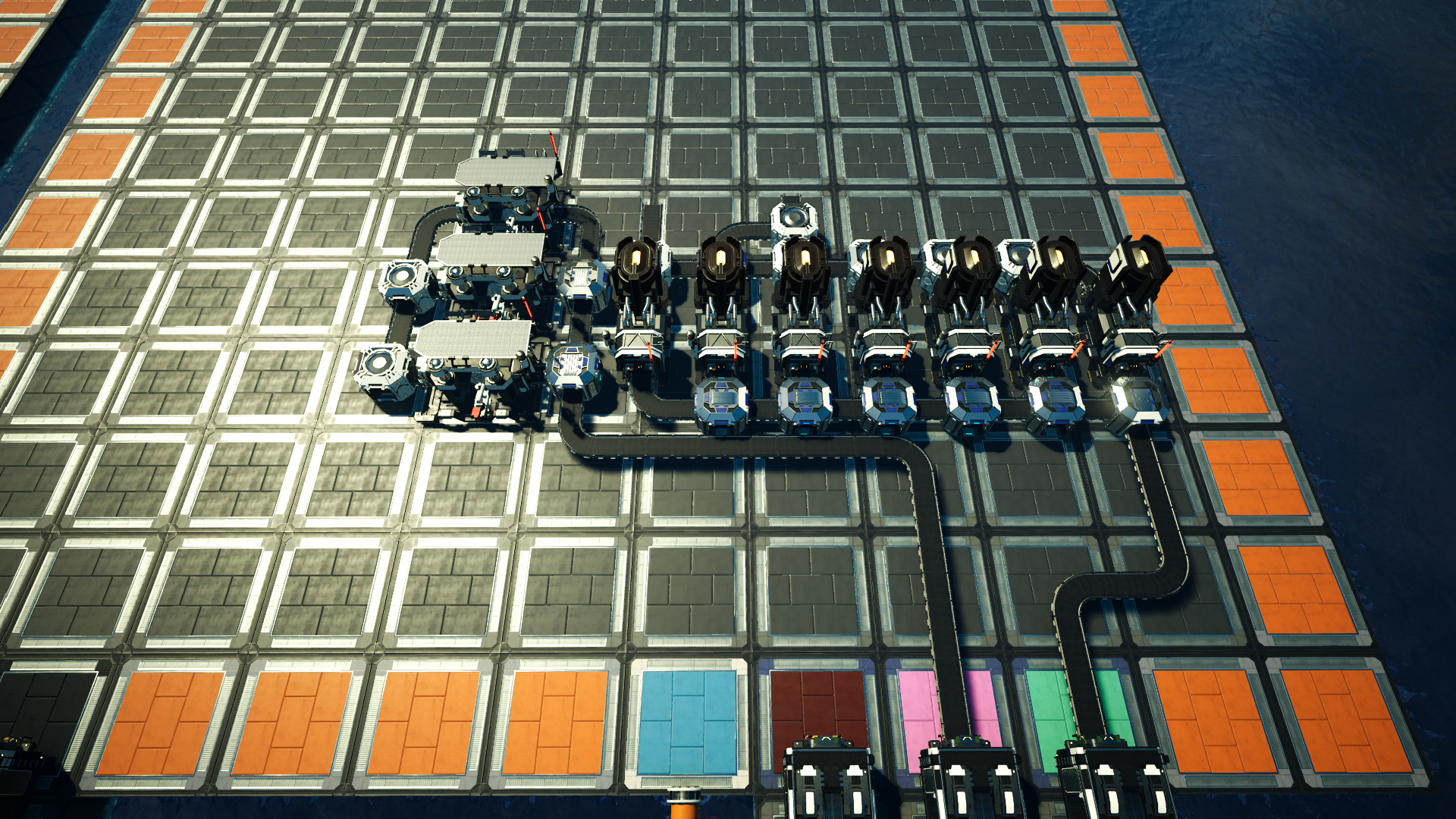 The first refinery shall be placed facing the left of the build and placed over the middle of the first and second row in the third to fifth column. This refinery will be set to alumina solution and fed with the bauxite and 120 water – it will need 180 water to run fully but we will recycle the water we’ve got from the alumina scrap refinery that we will be placing next.
So infront of the refinery liquid input place a junction and a valve to stop backflow. We will then run a second liquid pipe along the front side of the build and this will also have a valve facing towards the pipe joint. Make sure the silica output is merged with the previous silica line. The Alumina solution will be run directly into a second refinery which we shall place now.

This refinery will be facing the top of the build spanning the second column at the start of the second row, this will be set to aluminium scrap and we will run the water output back round to the water pipe at the front of the build we just placed. This will want to be fed with the alumina solution along with the coal from the second column. This should be set to 50% clockspeed and the scrap will head to the Aluminium ingot foundries which we will place next. 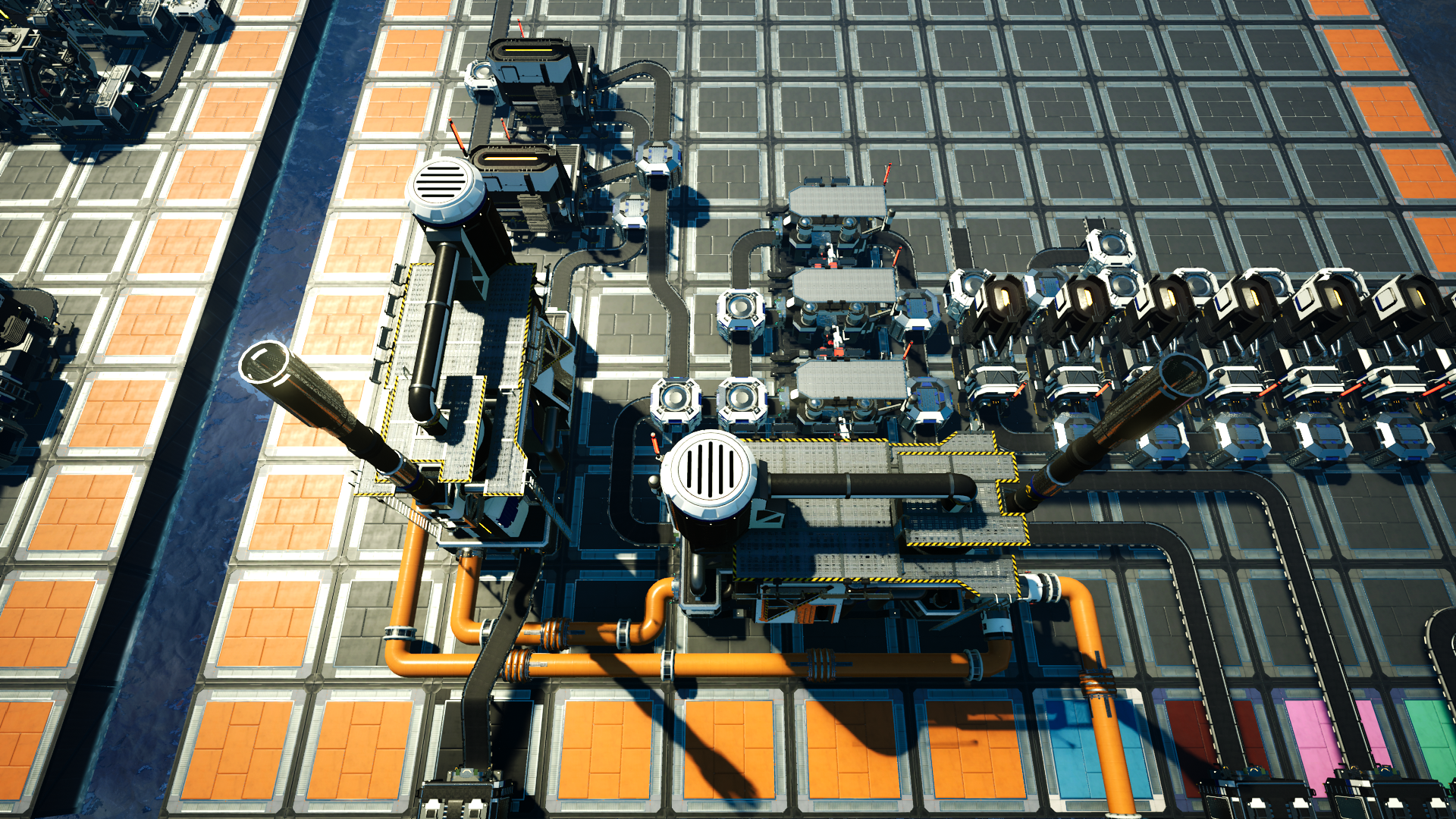 At this point we will need to place two foundries. These will be set to aluminium ingots and run at 100% clockspeed. Place these in the second column facing the left of the build spanning the fifth and sixth row, as well as the seventh row.
These will be fed by the silica which we have merged in the third row as well as the aluminium scrap we’ve just started producing. Make sure to merge these two foundries together and run this line up to the tenth row. 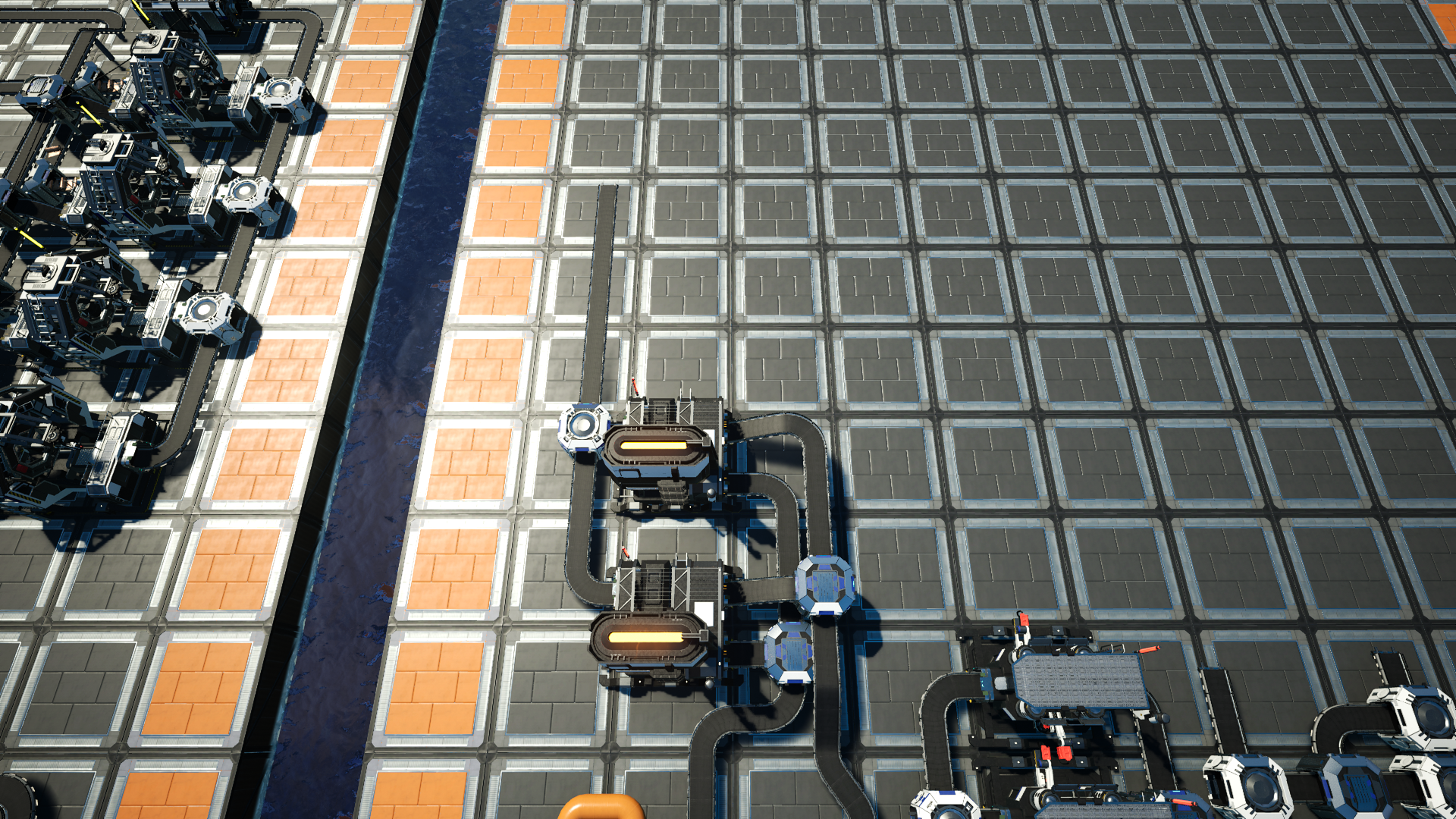 Next, we will need to place four assemblers, from the second and third column in the 12th row across to the right, here we have a little more space in this layour should you wish to keep it compact or a little more separated like mine. We will need to run two manifolds, one of the aluminium ingots and a second one of copper ingots which we will take from the first and second smelter we placed earlier, I run the conveyor as close to the quartz constructors as possible and then up, under the foundries manifold line. These aseemblers will all be set to 100% clockspeed and be merged together to be taken to the final assembler line which we will place soon. First however, we will place the copper sheet line. 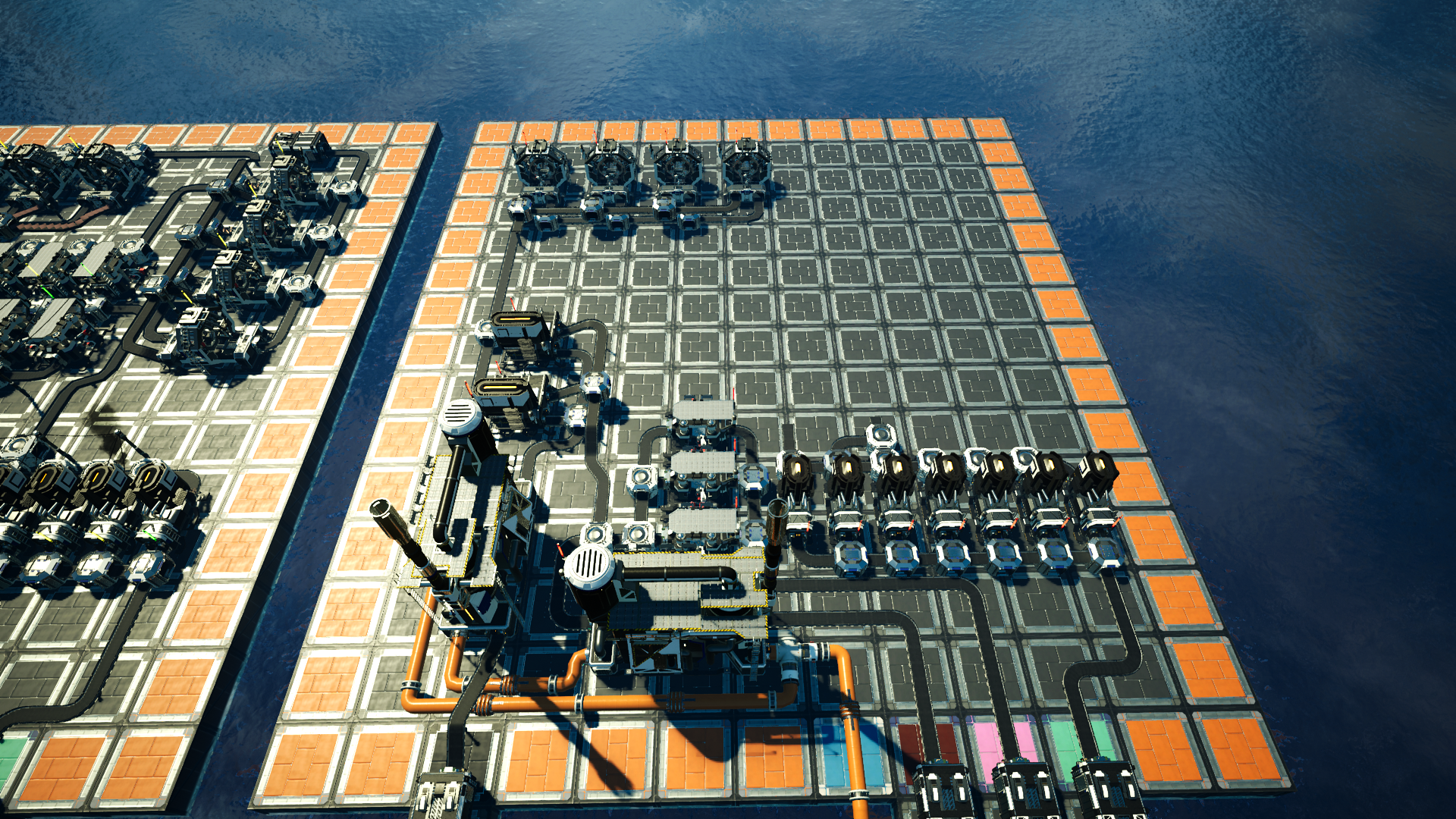 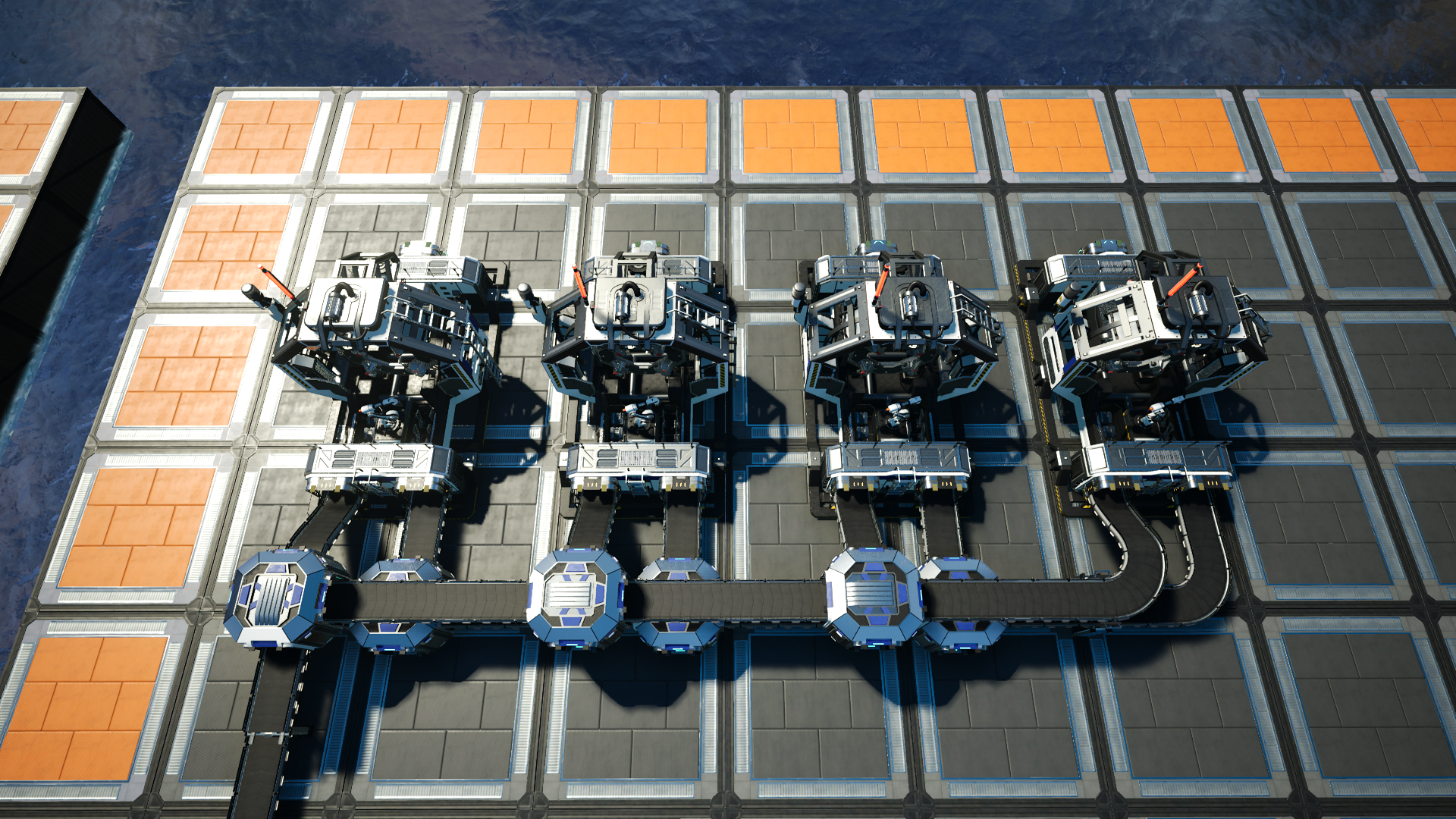 Taking the second set of copper ingots from the smelters, we will run these into a constructors line to produce copper sheets. Place down four constructors facing the bottom of the build in the seventh row spaning the fourth and fifth column along to the seventh and eight column. We will also need to place another four constructors parallel to these in the ninth row facing the top of the build, in between build a manifold line and feed this with the copper ingots. These should all be set to 100% clockspeed and will run the copper sheets along to the top of the build infront of the top right constructor. For the last part of this build, we will place four more assemblers facing the right of the layout. These will be set to heatsinks, with one assembler set to 20% clockspeed. Build a two tier manifold running alclad aluminium sheets, and copper sheets. Merge these assemblers together and run to a storage unit. This will provide you once at full capacity with 24 Heatsinks per minute. The build wont require greater belts higher than MK3. 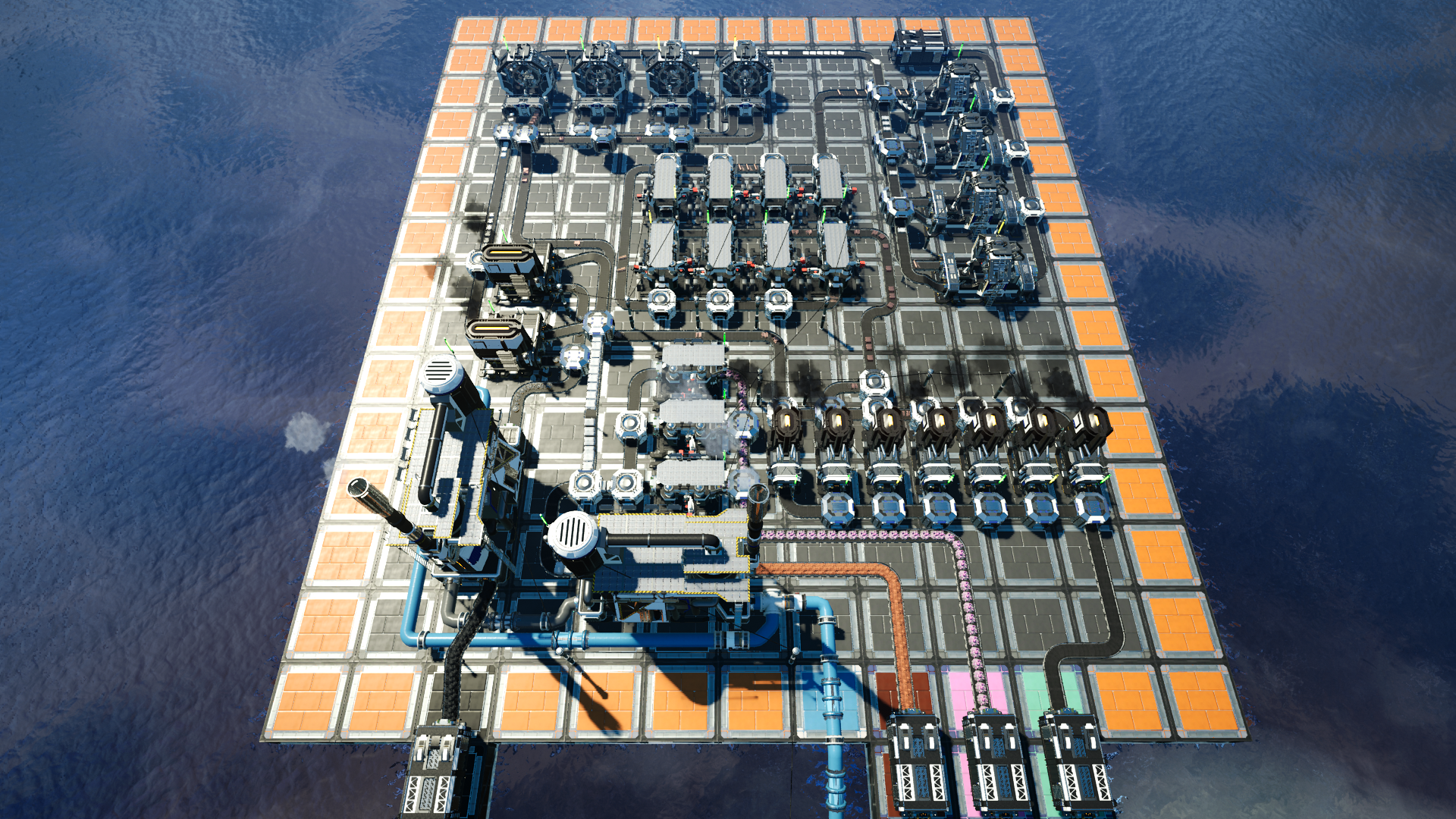