This guide will breakdown a layout for each Turbo fuel recipe, and show you how to maximize your gains from a single normal crude oil node.

This guide will breakdown a layout for each Turbo fuel recipe available, including alternate recipes from a single normal crude oil node.

Checkout the video here:
The Most Efficient Turbo Fuel Layouts in Satisfactory

Should you wish to check out the layouts in game, you can find the save available on the channel's Patreon page.
TotalXclipse on Patreon

The following layouts are all based on a single extractor on a normal crude oil node. This equates to 120 crude oil feeding the following setups.
These layouts are dedicated to the production of Turbo fuel only, therefore any excess resources will be sunk - these can be used to  produce other resources if needed.
In order to unlock turbo fuel you will need to research the sulphur tree in the MAM. You will also need harddrives available to research these recipes.
Only once you've unlocked the initial turbo fuel recipe will you be able to find the alternate recipes in hard drives.
A lot of these recipes, will make use of fuel layouts which we covered in our last guide. Should you wish to refer to them, you can find them here.

The first layout, will be the simplest to produce and not require any extra alternate recipes.
To start, we will place the basic fuel layout and we will do this on a seven by ten grid. Place two refineries at the base of the grid and feed these with the crude oil.
These two refineries will be set to the fuel recipe turning crude oil into fuel and polymer resin.
The resin should be run across a merging line and then fed into an awesome sink to ensure the refineries do not fill up with polymer resin and stop the production of fuel.
At this point you will want to place three assemblers in the bottom left had corner, these will produce compacted coal, and run at a combined clockspeed of 221.33% (one will need to be underclocked by 21.33%)

The compacted coal and fuel will both be run to the top of the grid where they shall feed four refineries, these should be set to turbo fuel with one refinery running at 55.6% clockspeed. These should then be merged and sent on to be packaged, used as fuel or set to storage. 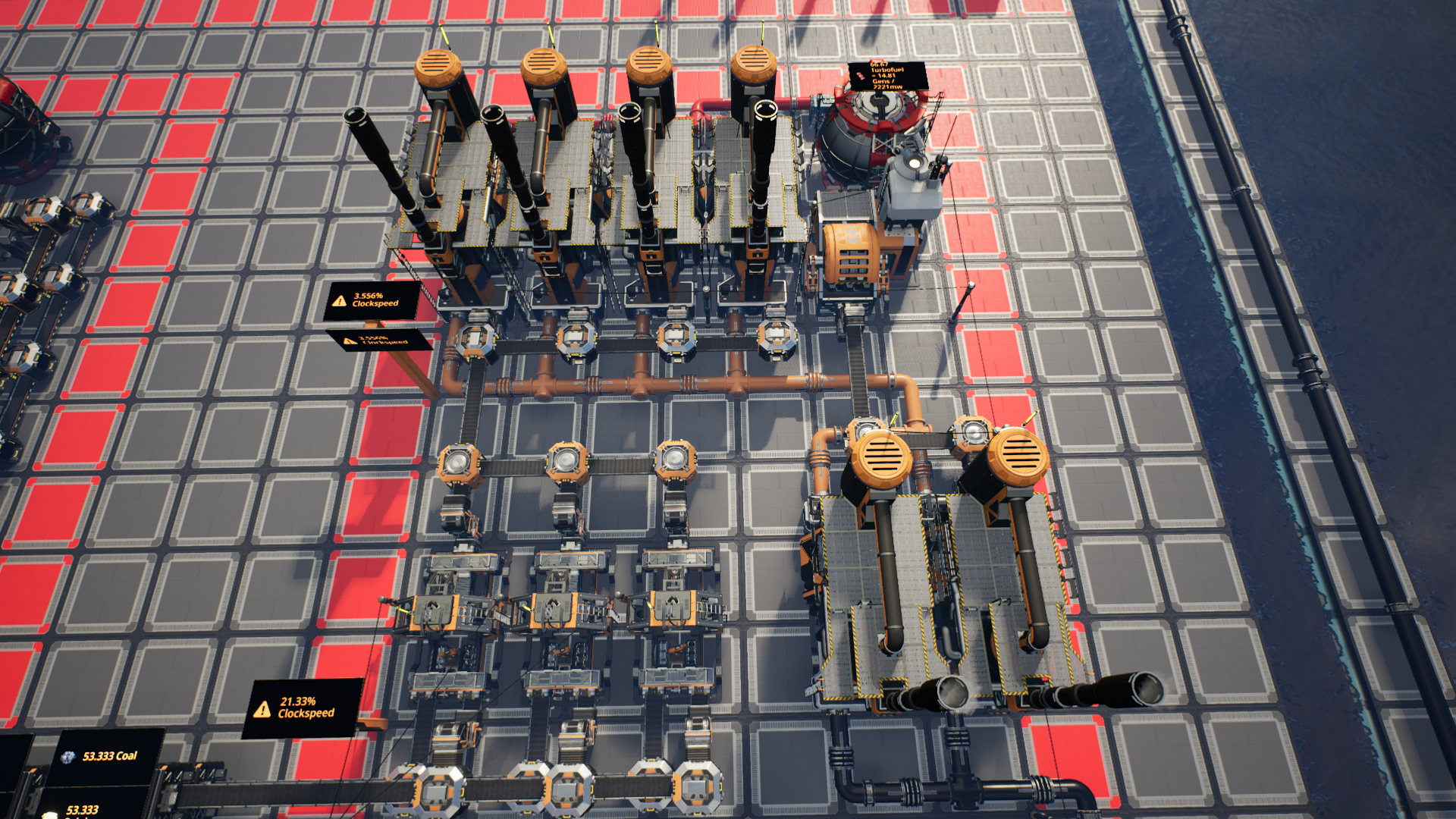 Once done, you'll be producing 66.67 Turbo Fuel which is the equivalent of 14.81 fuel generators producing a total of 2221mw of power.

To the right of the grid we will place six assemblers, these will be producing compacted coal from the 128 coal and sulphur provided. One of these assemblers will need to be set to 12% clockspeed. The output should be merged together and sent to the heavy turbo fuel refineries. Note that you will need to use a mk3 belt for these manifolds. ~

This build will produce a total of 128 Heavy Turbo Fuel per minute, the equivalent of 4266mw being produced by 28.44 fuel generators. 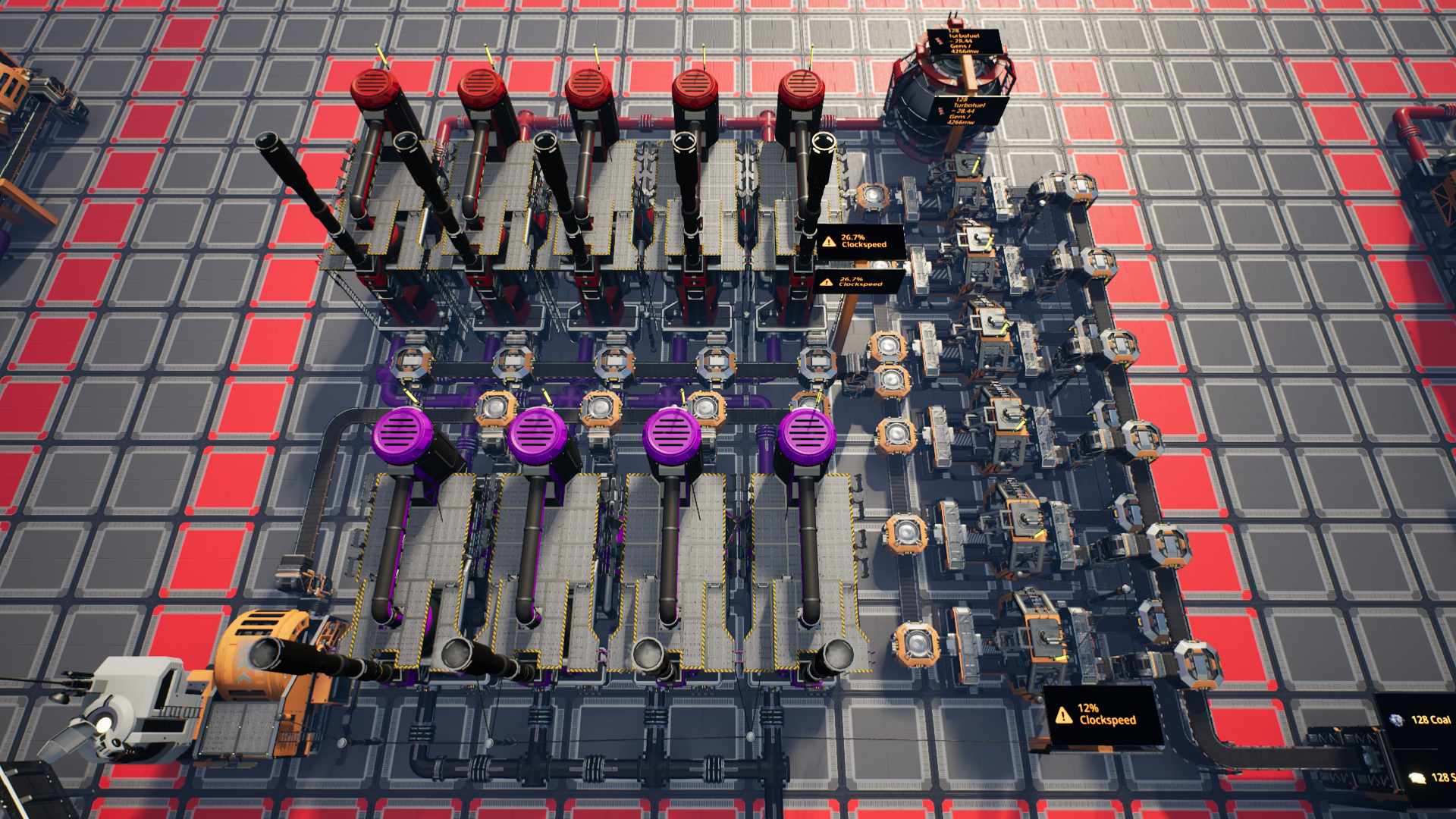 The blend turbo fuel is probably the most productive turbofuel layout for the least amount of resources of the previous designs, this is because it requires only 60 sulphur along with the 120 crude oil to run. This will also require the heavy oil residue alternate recipe to run.

First place down a nine by 12 grid. At the bottom we will start with the four refineries set to the heavy oil residue, again, all the polymer resin will be placed in a sink. The first two heavy oil however will run along a manifold feeding four blenders. These should be set to the diluted fuel recipe with one of the blenders being set to 20% clockspeed.

This first refinery will be set to residual fuel at 100% clockspeed and the rest of the heavy oil residue will flow to the second refinery (black) to produce petroleum coke at 50% clockspeed.

At this point we shall place three blenders (outputs facing the left of the grid) And from here we will run the sulphur, petroleum coke, heavy oil residue and fuel along a manifold up the centre of the build to the blenders. 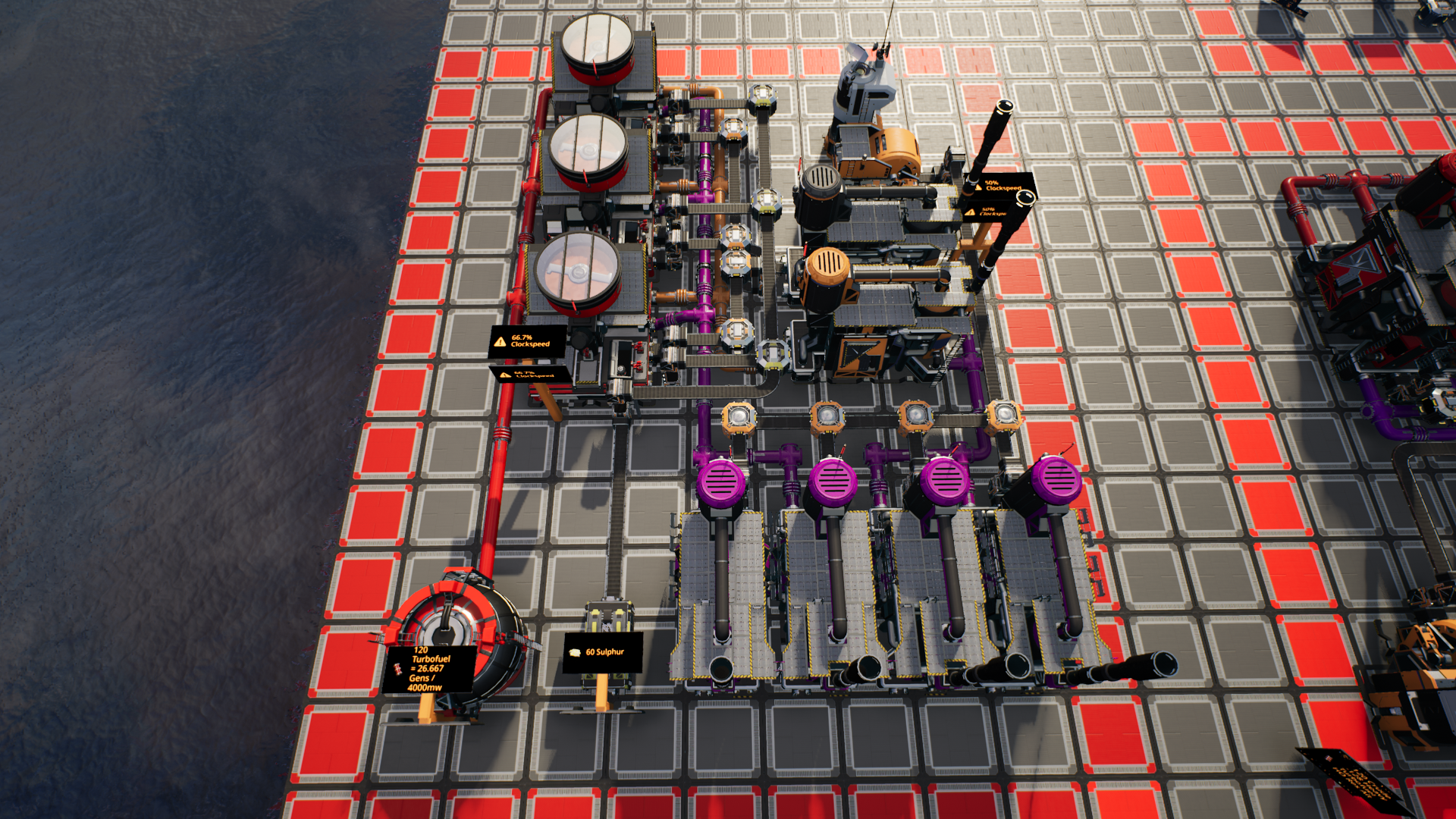 This setup will produce a total of 120 Turbo Fuel per minute - Just shy of the 128 the previous setup produced.  This is sufficient to run 26.67 fuel generators, and produce 4,000mw of power.

However, all of these recipes pale in comparison to the next setup which will make use of the blend diluted fuel or packaged diluted fuel alternate recipes.

For this particular setup you should consult the fuel layouts guide here. To setup the first section of the factory.

For the blender diluted fuel heavy turbo fuel alt, you will want roughly a 23 x 13 grid.The blender section will be placed on the right side of the grid. Once you're producing the fuel transport it using a Mk2 pipe to the centre of the grid we will return to this shortly. We will now place nine assemblers (black) at the bottom of the grid and set these to compacted coal. They will be fed by the 213.4 coal and sulphur. Do note that these will require a mk3 belt or higher to run.  One of the assemblers will be underclocked to 53.4% clockspeed. Once done, merge the outputs to gether and send these to the middle of the grid.

At this point we will place 15 refineries (red) in a manifold. These will all be set to Heavy Turbo Fuel and will be fed by the compacted coal and fuel from the blenders. One of these refineries will be set to 22.5% clockspeed. Once done, merge all the pipes together and send the turbo fuel to the chosen destination.

With this layout you will be producing a total of 266.7 Turbo fuel per minute, which is the equivalent of running 59.26 fuel generators and producing 8,889mw of power. 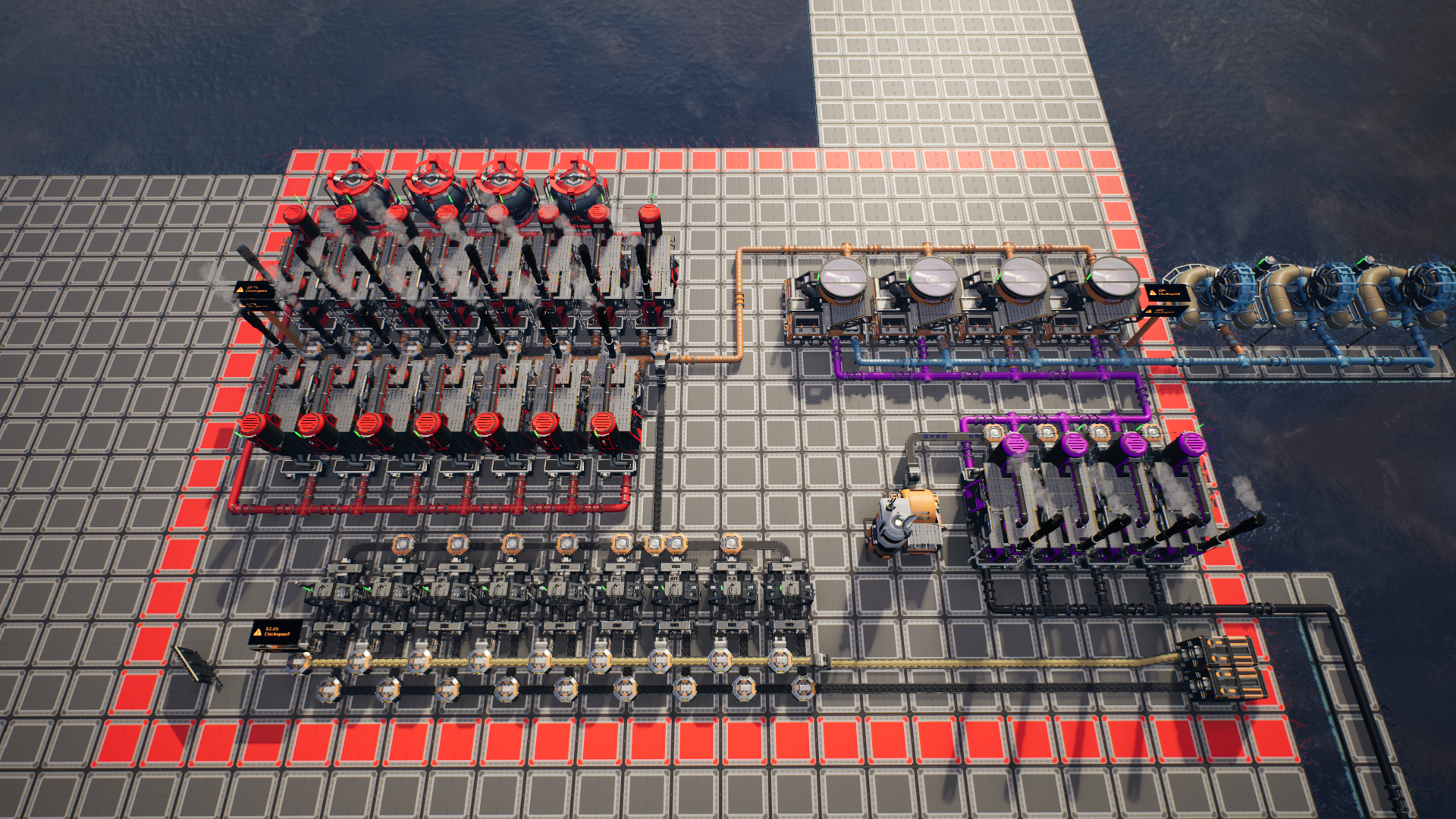 Though we'll talk about the efficacy of heavy oil residue in a later video, I should point out that if you are min-maxing the resources in the game then you will want to use the sulphur in other production chains rather than unneccesarilly using it to produce Turbo Fuel for power. (eg for Nuclear Power)