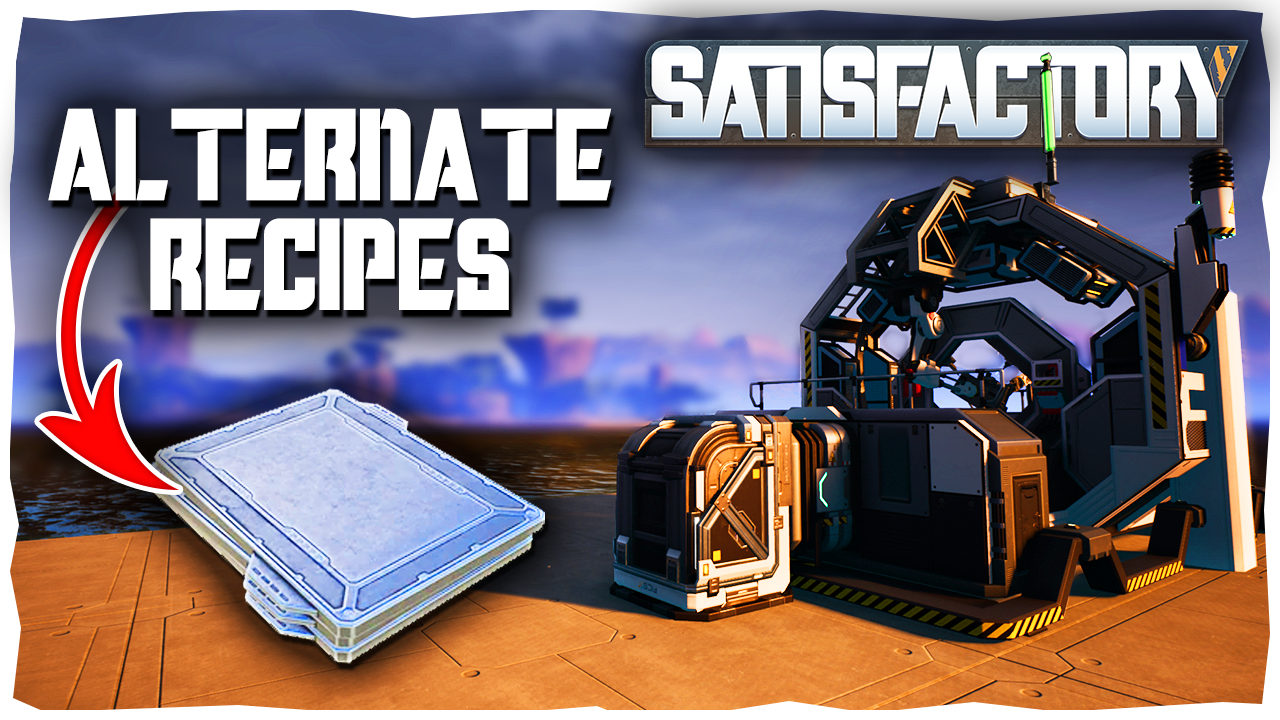 This guide will break down the efficient reinforced iron plates alternate recipe factory layouts video, giving you a clear layout to follow for your own factories.

Today we're going to be breaking down 4 different recipe layouts for reinforced iron plates, I recommend watching my video guide covering the builds whilst reading through the layouts here, for extra information.

This particular guide, will show the layouts, with a brief commentary on the build.
Note that in order to use these layouts you will have to have the necessary alternate recipes as named in the title of each layout, as well as any further recipe mentioned in the guide.

Next, merge and send the iron rods to the three constructors in the top right of the layout, these will produce 120 screws, which should be split into the two assemblers, along with the iron plates. These will turn the screws and plates into 10 Reinforced iron plates per minute.

Do note that when more than 60 items are on a belt, you will need to use at least a mk2 belt for this layout. 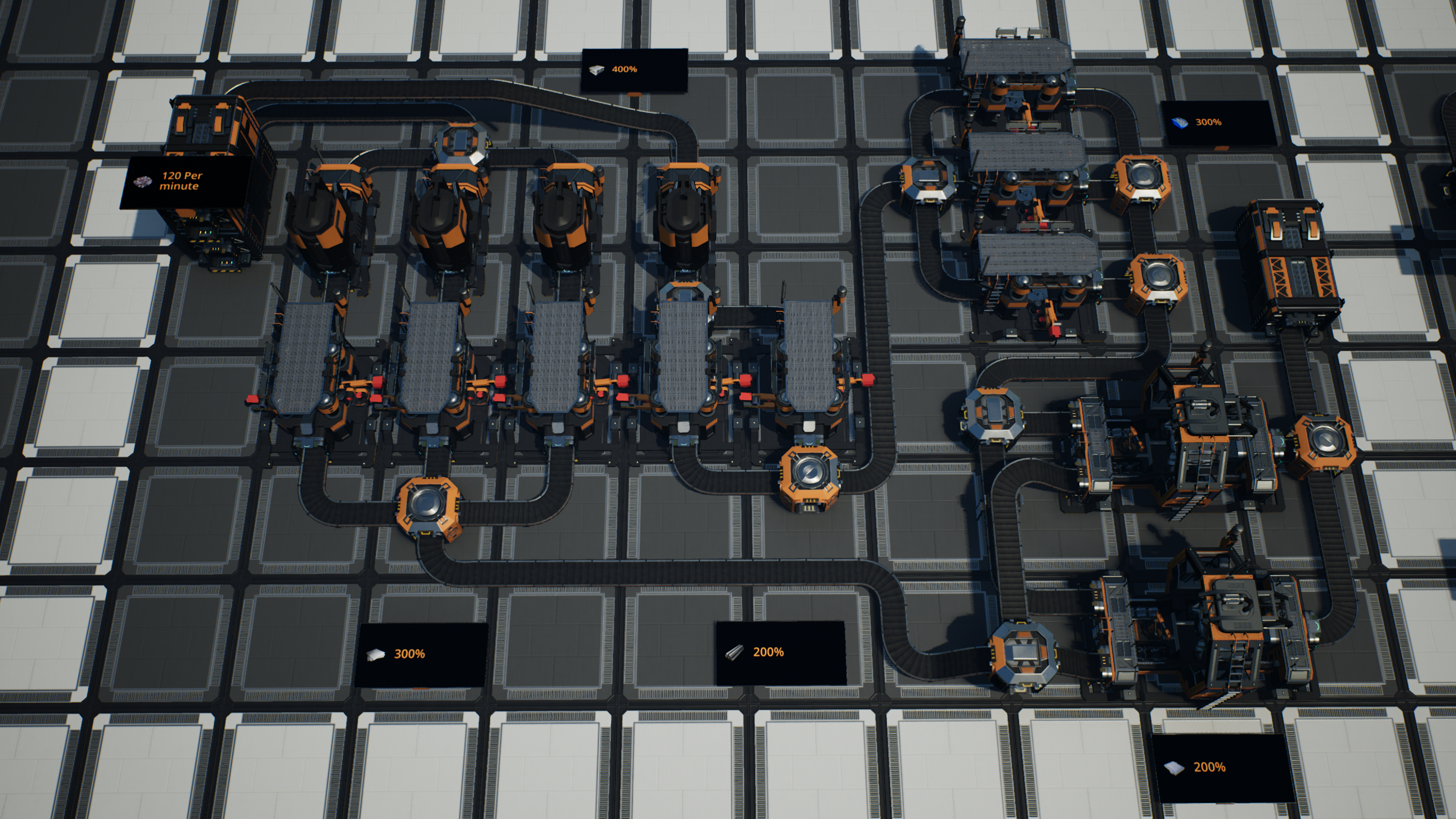 The next layout is for stitched iron plates, we will be using the iron wire alternate recipe so the layout only requires iron ore. For this build you will need 98 iron ore per minute.

In this build we will need four smelters, the first two will be clocked at 187.5% clockspeed (one smelter at 100% and one at 87.5%). Following these two smelters, you will need to place constructors producing iron plates, also at 187.5%. These will then merge and head to the two assemblers.

The next two smelters will be placed directly above the first two, with them running at 138.9%. These will then merge and split between four constructors producing iron wire running at 333.33% (three at 100% and one at 33.33%) These will then be sent and split into the two assemblers. 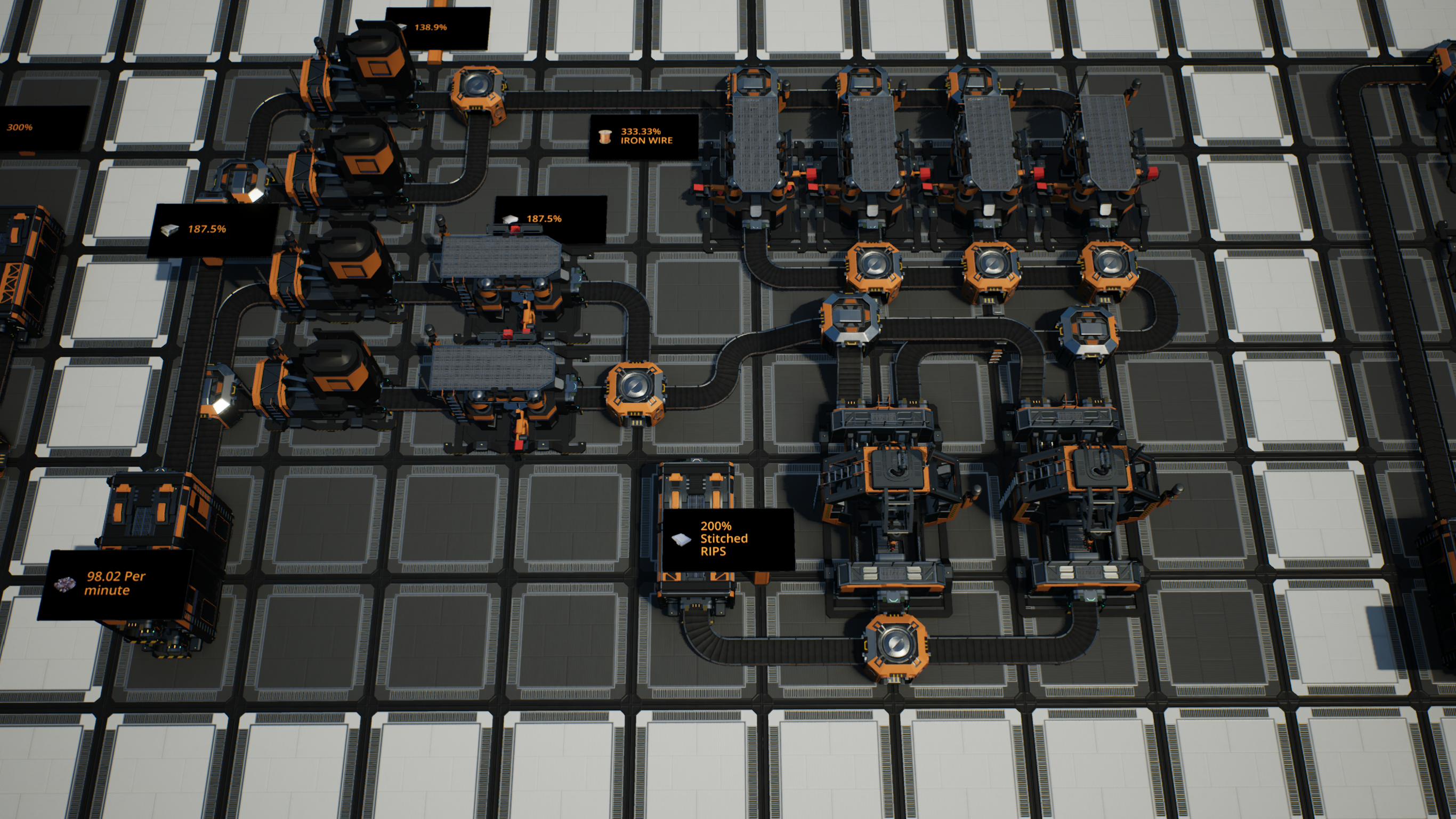 The next layout is for bolted reinforced iron plates, we will be using the Steel Screw alternate recipe so you will have to provide 9.615 steel beams for this layout along with 270 iron ore in order to produces 30 Reinforce iron plate per minute.

Starting off, send the 270 iron ore to 9 smelters, each running at 100% clockspeed, following each smelter you will need a constructor producing iron plates. These should then be merged and split between the two assemblers.

With the steel beams, we will send them to two constructors, both of which should be producing steel screws and set to 96.1538% clockspeed, these will then flow directly into the assemblers. (do not merge these lines due to the amount of screws being produced)
This setup will produce 30 reinforced iron plates per minute.

Do note that you will need to use a Mk3 belt whenever you have more than 120 resources on a given line. 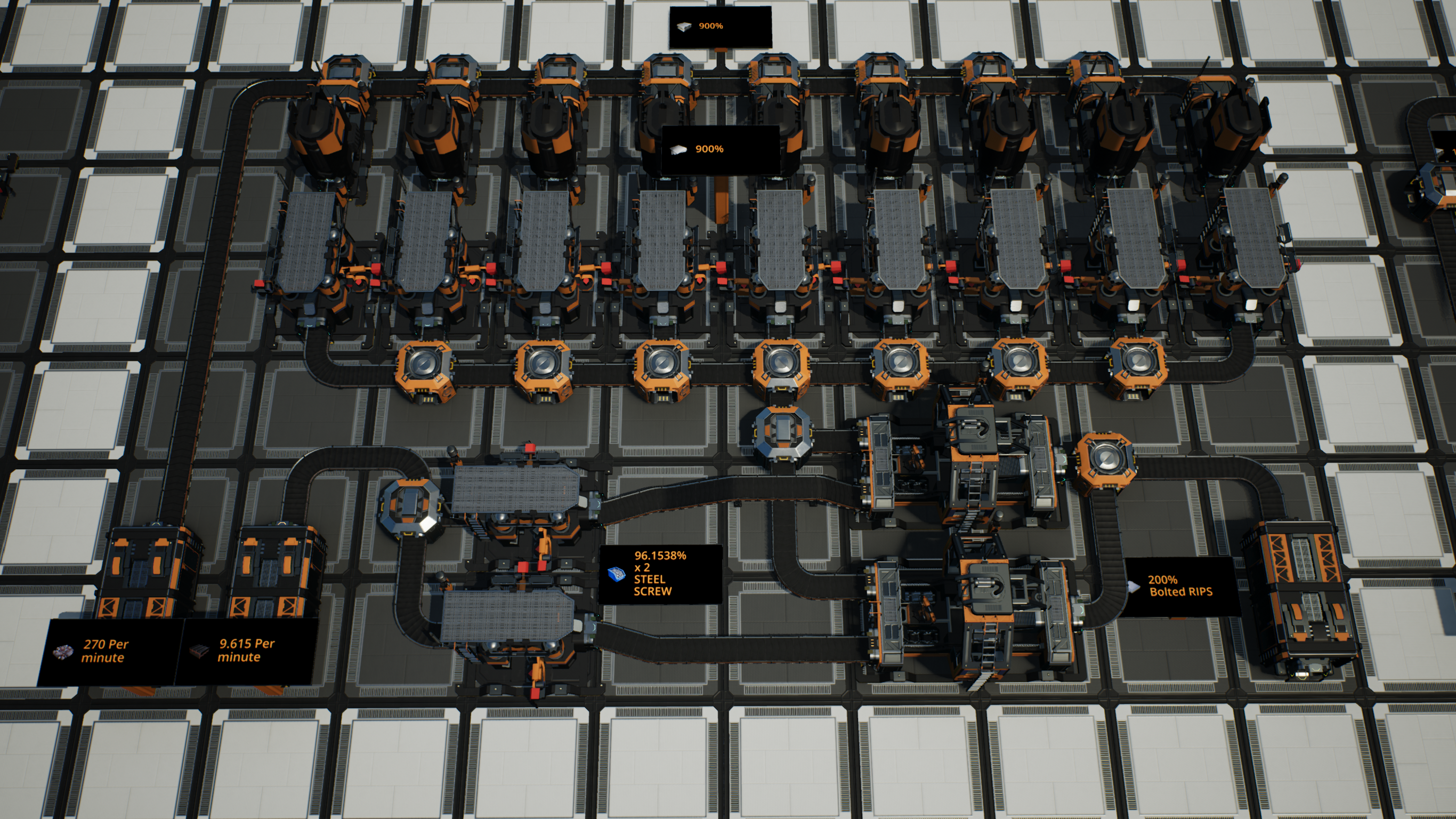 This particular build uses the Adhere iron plate recipe, and uses 7.5 rubber per minute along with 33.75 iron ore to produce 7.5 reinforced iron plates per minute.

First run the rubber directly into the two assemblers. 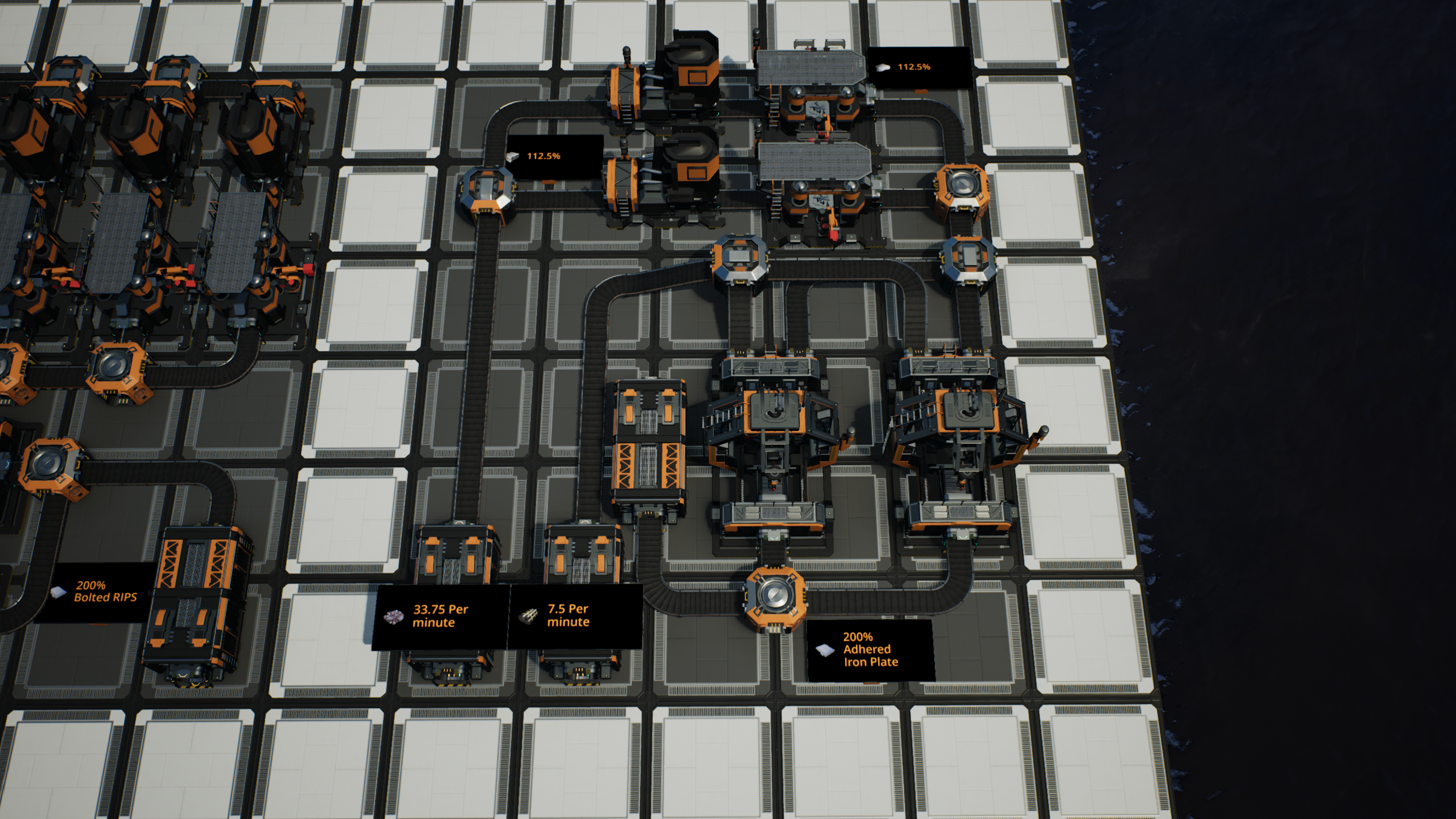