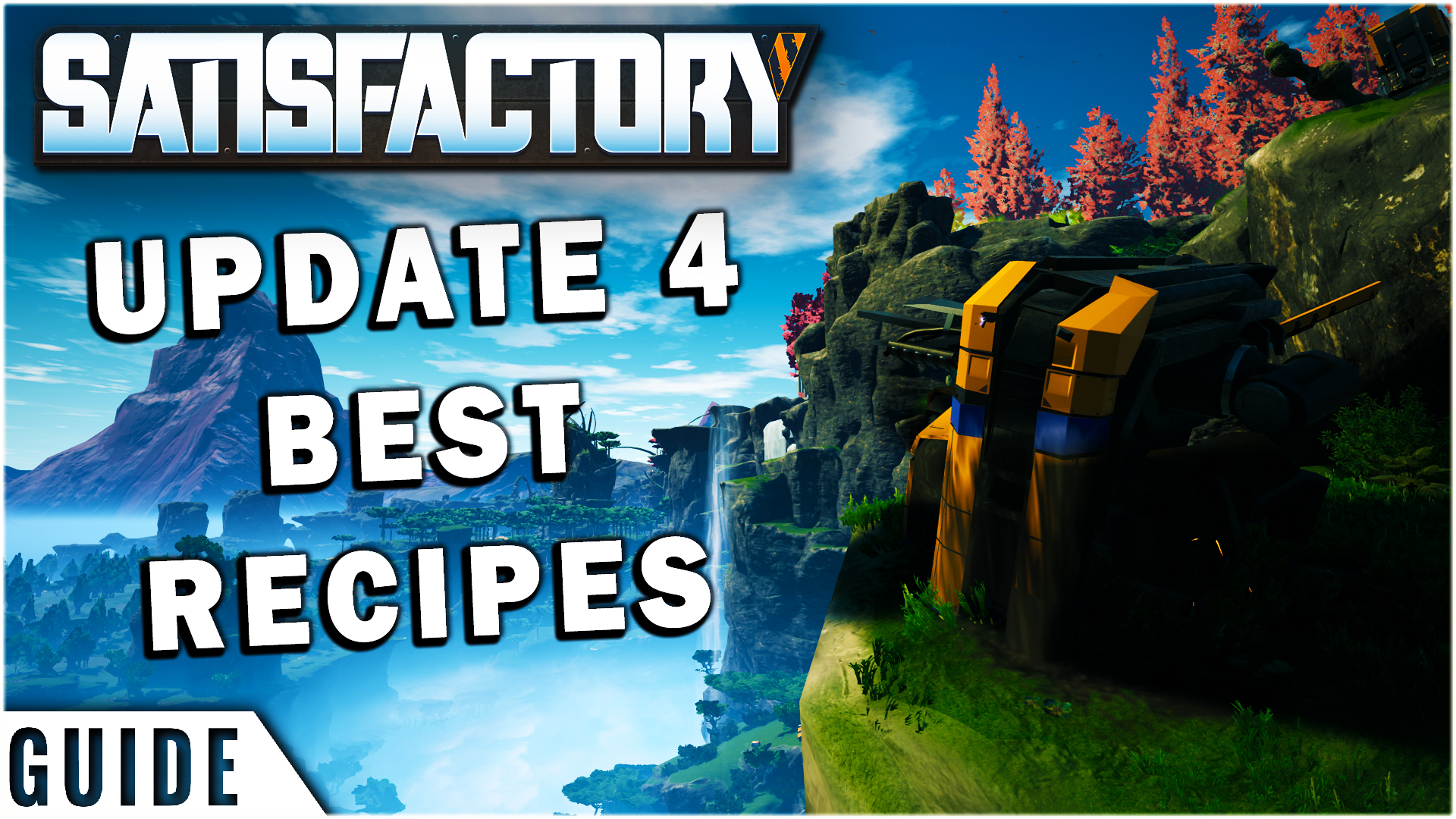 Update 4 has arrived and with it, there's a lot of talk about the best alternate recipes. Some of the best recipes from update 3 have dropped off the list and we have some new contenders for the best recipes. Let's have a look at them.

So you want to know the best recipes in Satisfactory Update 4. Well, I can't say for sure which are the best as it really does depend on your game plan. Afterall, someone maximising the production in game will need different recipes versus someone who's trying to build the most items with the smallest footprint.

That being said we'll be going through my favourites, you can even find my video on the recipes here:
Best Alternate Recipes For Satisfactory Update 4

I should mention that we will go from the lower tiers to the later tiers in order and as recipes are unlocked based on your tier level, to increase your chances of unlocking each recipes, you should research the hard drives as soon as you unlock the tiers for these items.
Note that as this is specific to update 4, these recipes may well be balanced and changed in upcoming patches and updates.

1. Casted screws
This recipe is still available from update 3, and is a good recipe if you’re tight on space or power. This is also useful late game if you’re trying to maximise your steel elsewhere.

2. Stitched Iron Plate
Another old Recipe that’s great especially if you partner this with iron wire.

3. Iron Wire
Iron is the most freely available resource so where possible we will save copper for recipes dependent on copper,  and use where possible iron as a substitute. Iron wire is the perfect example.

4. Bolted Frame
My fourth favourite recipe available in the early tiers is Bolted Frame but only if you partner it with the steel screw recipe in tier 3. Doing so will boost production and reduce your steel consumption versus the steeled frame recipe.

5. Steel Screws
I’d argue this is still the best screw alt in game, unless you need the coal elsewhere but perhaps for your end game build you want to get rid of screws entirely. The reason this recipe is so good is that you can take a steel beam and turn it into a large amount of screws so can be used as and when needed without sacrificing space for logistics.

6, Steel Rod
This one is hit and miss, and more useful early game than anything else as it gives you a  Small reduction of items, buildings and power.

7. Copper Alloy Ingot
This is a no brainer, take iron a resource of abundance, and combine it with copper ore to create more copper ingots. That being said late game, if you have the power available and want the most efficient recipe for production, go with the pure alt recipes.

8. Fused Quickwire
For the same reasons as above, it takes a combines a common resource (copper) with caterium to produce extra quickwire. As caterium’s rarer pick this if you can.

9. Solid Steel Ingot
Another no brainer, it reduces the amount of coal and iron needed for steel and reduces the power cost too. All round great recipe. Especially when partnered with pure iron ingots.

10. Encased Industrial Pipe
Reduces the price to produce encased industrial beams, but does slow down production from 6 to 4 per minute.

11. Steel Rotor
Slightly reduces items but can get rid of screws, also allows you to have stators and rotors produced in the same location, using the same resources. Great for earlier gameplay.

12. Steeled Frame
This is great if you want to remove screws from your production chain but if you’re wanting a recipe that’s best for production go with bolted Frame along with steel screws.

13. Pure Recipes
Just add water and you magically have more resources! Yes please, just make sure you have enough power!

14. Heavy Encased Frames
Great all round at this stage, reducing items building and power usage and while we’re at it, we’re getting rid of screws at the same time!

15. Caterium Computers / Crystal Computers
This is more or less a tie, it reduces the amount of buildings and power required but exchanges the use of quartz for caterium or vice versa. Also this recipe and the crystal computer recipe can be used to remove plastic from the manufacturing process

16. Silicon Circuit Board
No suprise here, as mentioned this can remove oil from the production of computers - if that's what you're into.

17. Caterium Circuit Board
A really good alternative to the silicon circuit board however it still requires oil, which you may want to remove from this production line.

18. Recycled plastic/Rubber, Heavy Oil Residue, Diluted packaged Fuel
These are all great recipes, which everyone knows, can be combined to turn 3 crude into 9 plastic.... That is big late game.

19. TurboFuel
This really isn't that great, but if you want it go with the standard turbo fuel recipe alongside the diluted packaged fuel. Also make sure to unlock compacted coal first.

20. Adhered Iron Plate
This is pretty good if you’re tripling your plastic and rubber but I’d still go with the stitched iron plate personally.

21. Superstate Computer
Trades caterium and Quartz for Sulfur and Bauxite allowing us to cut plastic from the chain entirely, not bad!

22. Turbo Pressure Motor
As it stands alone this is the better recipe, reducing pretty much all resources but it does use more nitrogen gas and bauxite, so this recipe could be dependant on whether you’re maxing out plutonium recycling. Keep an eye on this recipe. That being said if you need nitrogen go down the Turbo Electric Motor route with the heat exchanger & Radio Connection unit.

23. Eclectrode Aluminum Scrap
For Aluminium Ingots go down the route of electrode aluminum scrap this reduces bauxite and coal, while very slightly reducing items but it needs petroleum coke. Also I recommend this alongside sloppy alumina which trades quartz for less Bauxite.

24. Heat Fused Frame
Adds fuel to production, which is fine late game as you’ll probably be using Nuclear power. Better yet it reduces the amount of bauxite required by over 15%  which is great if you’re going for a max build!

25. Uranium Fuel Unit
Reduces items and buildings but at the cost of a lot more quartz. Could be beneficial to your build but it’s not for everyone.

So those are my recommended recipes for Update 4, there are some other hit and miss recipes, and some that are just outright terrible, speaking of which, I may cover them in a video soon!